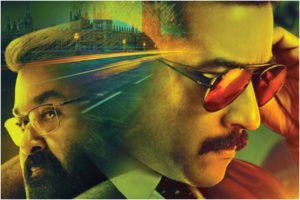 Filmmaker SS Rajamouli revealed the first look of Suriya Sivakumar and Mohanlal from their upcoming Telugu movie Bandobast. On Friday, he took to Twitter giving the first glimpse of the actors and wrote, “Happy to release the First Look of @Suriya_offl & @Mohanlal sir’s #Bandobast. Best wishes to @anavenkat & his entire team..:)” (sic)

With the hues of green and yellow, while Suriya can be seen donning a moustache, Mohanlal can be seen sporting a pair of reading glasses and beard in the poster. Bandobast will mark the reunion of director KV Anand and Tamil star Suriya for the third time. The duo has previously worked in Ayan (2009) and Maattrraan (2012). The Telugu version of much anticipated Tamil film Kaappaan also features Arya in the lead role.

Reportedly, Bandobast is said to feature Suriya as an elite police official, whereas Mohanlal is said to portray the role of Prime Minister of India. The film will hit the theaters on August 30 this year.

Thanking Rajamouli, Suriya tweeted, “Thank you so very much @ssrajamouli sir! Our whole team is grateful! Love you sir #Bandobast.” (sic) Take a look at the posters:

Thank you so very much @ssrajamouli sir! Our whole team is grateful! Love you sir #Bandobast 🙏🏽😊 https://t.co/3OIm5FAZAw

Meanwhile, Malayalam cinema’s star Mohanlal’s recently released the teaser of his upcoming film, Lucifer 2. The sequel to 2019 super hit film Lucifer (2019), featuring Vivek Oberoi, Indrajith, Manju Warrier, Tovino Thomas alongside Mohanlal, is titled Empuraan and will reportedly be a prequel and sequel of sorts to Lucifer.