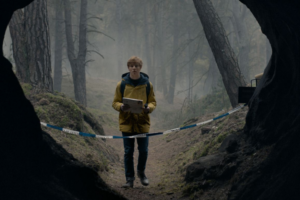 Netflix’s ‘Dark’ plays on an age-old concept which we’ve all grown up watching and are familiar to by now: Time Travel.

The German science-fiction Netflix original which began in 2017 piqued viewers interests when it brought to us the concept we already knew about, with an angle we didn’t consider before.

“We think time is linear: The past affects the future, but the future can also affect the past.” The theory of time travel in the show lies in the fact that our conception of time itself, is flawed, and instead of being linear, time is actually a circle.

There are spoilers ahead.

Season 1 acquaints us with characters we don’t immediately empathize with, but are quite familiar with: Jonas Kahnwald, the protagonist is a young teenage boy struggling to impress the girl he loves, struggling to get over his mental health issues, struggling to adjust back to normalcy at school, basically, always struggling.

The time travel machine in the first season is presented to him by a bespectacled scientist, who builds it from scratch. Wait, isn’t that just Back to the Future?

One major reason that Dark works as a show is because it relies on familiar tropes introduced through mainstream pop culture movies. It then adds a rational, reasonable, logical conclusion behind every leap of faith. Instead of introducing a new concept and spending eons explaining it, Dark plays on already established notions, and simply justifies it within its plot lines – and there are a many plot-lines.

For instance the return of a older version of a character to a younger version to prevent them from doing something. When Dark introduces ‘The Stranger’ who gives Jonas advice, we all know he’s an older version of Jonas. When he reveals it between talk in a panicked situation, the lack of suspense proves the makers knew the audience would catch onto it anyway.

Instead of going down the familiar road of why older Jonas is back, the makers of Dark explore something else entirely: older Jonas has lived through the exact events, and knows he cannot do anything to change it. He merely acts as a pawn destined to be stuck in a loop of events.

It isn’t just an older version who returns, there’s also an assassin, much like The Terminator, and even though he is not exactly targeting the main character, he still ends up killing enough people to keep the loop of time travel going, or in this case ‘Cycles’ which occur once every 33 years.

Noah, whose younger version we meet in Season 2 is following orders from an unknown entity that is later revealed as ‘Adam,’ who then (plot twist) we are told is a really old version of Jonas.

Instead of showing us just two lead characters that travel, Dark shows us how almost all characters on the show can time travel, making the process seem ordinary, and hence, more believable. It must be easy if everybody can do it, right!

Another factor the show normalises is the cause for wormholes. Instead of one scientific invention, it relies on already familiar elements: Nuclear power plants and nuclear waste. A lot of events, including the ‘Apocalypse’ is also triggered through nuclear waste. I don’t need to tell you how close is that to reality.

Why Netflix’s Dark manages to make sense without ridiculing itself is because all of the tropes it explores are already established. It simply builds on these and forms its entire plot based on them. It relies on all the tropes about time travel to kick-start the series, then creates a complicated story line which gets more intertwined the further it progresses.

Season 2 which ends on a note that it may not be time that the characters can explore, but also other dimensions, or ‘worlds’ may just continue Dark’s trope and play on our already

pre-existing notions of what ‘alternate dimensions’ are.

But maybe, this time, we won’t have to wait two years for another season.