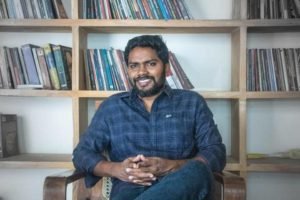 Director Pa. Ranjith’s office reception resembles a library. It’s a far cry from the Kodambakkam-esque spaces of Tamil directors, which usually boast film posters on the walls. Here, Ambedkar, Periyar and Marx rub shoulders on the bookshelves. There’s a carrom board in the corner which his assistant directors use for recreation and brainstorming. There’s not a single movie poster in sight. There are no photographs of him either. “Well, it was never about me,” shrugs off Ranjith, who has emerged not just as an important voice in Tamil cinema, but also as a voice against casteism.

The past few weeks have been eventful for Ranjith — his remarks on the 11th century Tamil emperor Raja Raja Cholan angered some people. He was granted conditional anticipatory bail just the day before we meet. “Pudhu anubhavam (new experience),” he says, as we settle down for a chat. Excerpts:

Why did you raise the topic of Raja Raja Cholan now?

I spoke about him because of the venue (Thanjavur) and because everyone claims that the Raja was from their caste. My main issue is this: why did the working class not own any land during his reign? What I said is based on what I have read in the works of K.K. Pillai, K.A. Neelakanda Sasthri, P.O. Velsamy, and Noboru Karashima.

Raja Raja Cholan built magnificent temples and included the names of even barbers and dhobis in the engravings on the walls. Your thoughts?

I am in awe of the temple architecture. I have no issues with that aspect of the king, but it is during his reign that caste raised its ugly head — there were even separate graveyards for separate castes. It might have been prevalent earlier, but during his reign it became a strong practice. Several books point this out.

Why is it important for a filmmaker to be political in his work and outside of it?

I have to chronicle what I have learnt from life. I have to talk about what I faced in life in my works and elsewhere. The issue of caste has followed me everywhere from my growing-up years — be it in celebrations or disappointments. So when I became a director, I had to talk about it… there’s no way I can make films just to quench my creative thirst.

Take a tree, for instance. Or a well, or a playground. Most people in my village saw them as things of beauty or places of joy, but I did not… because society kept telling me it did not belong to me. Someone would say that I, a Dalit, was not allowed to climb the tree or use the well. I kept thinking: why is something so commonly used by everyone not accessible to me? So when I film a tree or a well today, I cannot see it only in an artistic way; it presents a different story to me. I want to be the filmmaker telling that story.

You can, of course, tell that story through alternate cinema but what are the challenges of doing it in commercial, superstar films?

When Rajini sir came to me, I knew he had selected me after watching my realistic films like Attakathi (2012) and Madras (2014); so I was quite insistent that Kabali (2016) and Kaala (2018) had to be in the style I was most comfortable with. Commercial cinema talks to the majority and that’s why I will be here. But people appreciate honest content. And with my films, I can surely say I’ve opened communication lines with my audience. This keeps me going.

Is there some unforgettable incident that triggered you to become political?

It was a part of my lifestyle. It was the way the neighbour’s kid handed me a glass of water in school. Or how the shopkeeper would not put the change in my hand but keep it on the counter. There are so many incidents. The one question that kept haunting me was: why were we (Dalits) not one with society? This might have been trivial for others, but it deeply disturbed me.

You mostly speak about issues from your childhood. Aren’t things vastly different in 2019?

How different? We just heard of a headmistress who asked children to clean toilets; a judgement that called Ilavarasan’s death a suicide. How do we say things have changed? We can’t even stomach reservations, but we say ‘New world. Let’s forget caste and be equals’. Asking people to forget centuries of oppression is also a violence. We need to discuss it, and make reparations. Unless we do this, we can’t say things have changed.

North Madras, Malaysia, Dharavi… your films are set in places that have people from the oppressed classes. How important is locale?

The backdrop is everything. If you go to any village, check out the posters, flags and statues there… they tell the story of the people living there. Every backdrop has a story behind it. I research the backdrop in detail when I film any character because I believe it contributes immensely. Think of an aerial shot where you see a village that has a settlement of 50 families staying a little away from the main area — it tells the story in a single visual.

Your dialogues are powerful, be it the ‘Gandhi dress – Ambedkar coat’ quip or ‘Nilam Engal Urimai’. Do you ever fear they’ll remain mere punchlines instead of making a statement?

I remember writing the ‘Gandhi – Ambedkar’ line and keeping the notepad in front of Rajini sir, worried what he’d say. “Super, sir,” he cried out, something I wasn’t expecting at all. After the shot was filmed, I went straight to the restroom and cried my heart out. It was too emotional; I felt I had made a strong statement through a powerful voice.

The women in your films are so strong. Can we expect a woman-centric film soon?

The women I grew up around were from the working class. What I saw in cinema — women standing meekly before their husbands — was something I had never encountered in real life. I have observed my parents, the women in my locality, and such characters have never been chronicled in Tamil cinema. That’s why I write strong roles for women. I strongly feel they can reform society if they become more empowered, because it is they who raise children, telling them who to mingle with and how. I have a couple of ideas that are entirely women-centric. There’s a love story, told completely from the woman’s point of view. I also hope to someday do a superhero story… on the lines of Wonder Woman.

Kaala’s climax had significant subtext in terms of colour. Manjal is the title of one of your plays. You try to explain concepts through colour. Is it successful?

I believe I’ve been successful. Colour is very significant in the Indian context. Take the flag — some people think saffron, green and white represent Hindus, Muslims and Christians. Ambedkar talks about the blue as a colour that denotes equality. I wanted to put all this in Kaala’s climax. It was essentially a fight sequence, but I wanted it to convey something philosophical — that if the people under these three colours come together, they can battle the hierarchy. And I believe the blue chakra represents this unity.