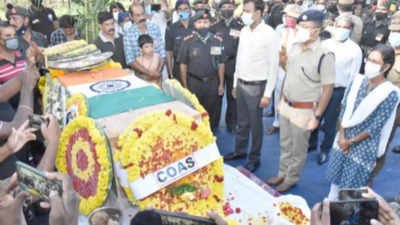 KANYAKUMARI: The mortal remains of havildar P R Krishna Prasad who died while on active duty in Jammu and Kashmir on December 8 was brought to his house in Andoor village near Ponmanai in Thiruvattar in Kanyakumari for the final rites on Saturday.
The 38-year-old who served in the army for 15 years is survived by his wife Sowmya (32) who is a private school teacher and a seven-year-old son and a five-year-old daughter.
B Krishna Prasad, the president of Andoor NSS Karayogam said that the havildar attached to Madras Regiment was on duty when he was fatally injured in a bunker collapse around 3.30 in the afternoon on December 8.

“We got the officials information about his death around 9 that night, stating that he died in an accident and the village sunk in grief, waiting for his mortal remains,” the community leader said.

His body was flown to Thiruvananthapuram airport around 12.30am on Saturday, where it was received by senior army officials and government officials. From Thiruvananthapuram it was brought to Ponmanai on road around 7.30am, where it was received by his inconsolable family. It was kept for public to pay homage for close to half an hour before performing the final rites.

Kanyakumari district collector M Arvind and superintendent of police V Badri Narayanan, defence officials, fellow defence personnel, ex-servicemen and government officials were among those who paid homage to the havildar.
After a tearful homage paid by his kin, friends and villagers, the mortal remains were cremated with full state honours amidst the firing of 24 rounds.
The deceased havildar is from a family of ex-servicemen. The others include his brother-in-law and father-in-law.