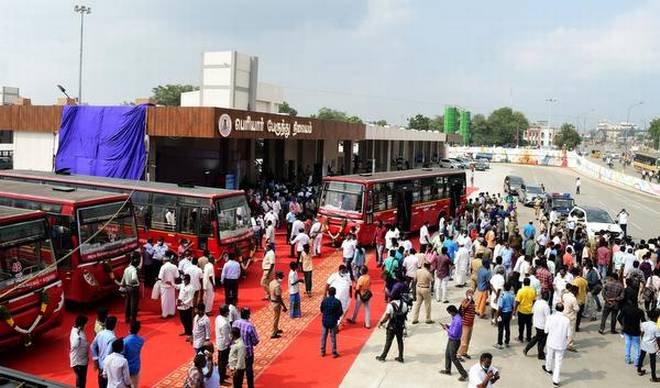 Chief Minister M.K. Stalin on Wednesday inaugurated, through video-conferencing facility, Periyar bus stand that has been renovated under the Smart City project.

The bus stand with two levels of underground parking facility and four bays to hold 40 buses at a time has been constructed at a cost of ₹55 crore. The new bus stand building has come up on 3,104 square metres.

A shopping complex is also coming up on 3.02 hectares at a cost of ₹119.56 crore. Seventeen buses could also be parked along the shopping complex. A total of 7,200 trips of buses to different parts of the city and the district would be operated from this bus stand.

On Saturday, bus services would start to and from MGR bus stand (PF 1), Nedungulam, Chinthamani (PF 2) and Arapalayam (PF 3).

The Tourists Information Centre in the two-storey building, with 1,518 sq metres of plinth area, has a restaurant and lodging facility. People can get information about the tourists spots in and around the city.

The Heritage Arrival plaza (796 sq metres) has an arrival centre, a shopping centre with 10 shops and a restaurant.