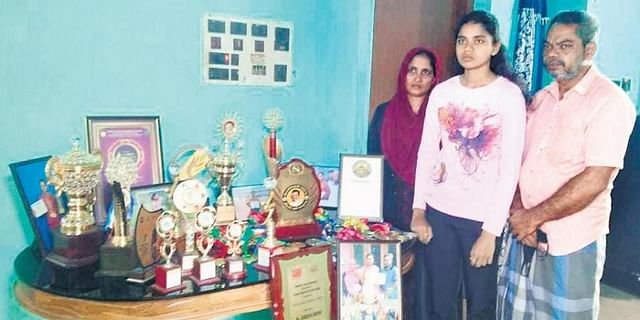 NAGERCOIL: 18-year-old M Sameeha Barvin with hearing impairment was set to participate in the fourth World Deaf Athletics Championships to be held from August 23-28 in Poland. However, it was alleged that even though Barvin was selected in the national trials, the All India Sports Council of the Deaf has refused to send her to Poland citing that she would be the only female athlete with five male athletes and a shortage of funds.

Born to Mujib and Salamath of Kadayalumoodu in Kanniyakumari district, Barvin started speaking and hearing like other children. However, at the age of six she developed fever and lost her speaking and hearing ability. To admit Barvin in a special school, Mujib, a hotel worker, moved to Nagercoil, where she started developing her athletic skills and excelled in high jump and long jump.

Barvin’s mother Salamath claimed,“She has been selected to participate in long jump in World Championship for Deaf in Poland, but the All India Sports Council of the Deaf has declined to send her citing lack of funds.” She urged the authorities concerned to take steps.

Meanwhile, Kanniyakumari Lok Sabha MP Vijay Vasanth has been taking steps to help Barvin fulfil her dreams. The MP said that he gave a memorandum to Central Sports Minister Anurag Singh Thakur urging him to send Barvin to Poland to participate in the event. “When we contacted the All India Sports Council of the Deaf they did say about fund constraints in sending her alone. When we said that we would mobilise sponsors for her, the Sports Ministry said that the girl was not qualified in the selection. The authorities should ensure transparency  in sports selection,” Vasanth added. In a press release, the Sports Authority of India (SAI) stated, “It is clarified that SAI does not select athletes to represent India. It is the prerogative of the concerned National Sports Federation.”

On receiving a complaint from the athlete, SAI obtained a report from AISCD. According to the report, AISCD had conducted the selection trials on July 22, 2021 in which Ms Sameeha Barwin participated in 200 m run and long jump events. As per the qualification mark, she did not qualify. Further, she was placed at 8th position as per the AISCD merit list, the release said.

SAI has no role in the selection of athletes for any Tournaments. The allegation that SAI dropped any athlete from participating in the International tournament due to either safety concerns or lack of funds is not true, it added.