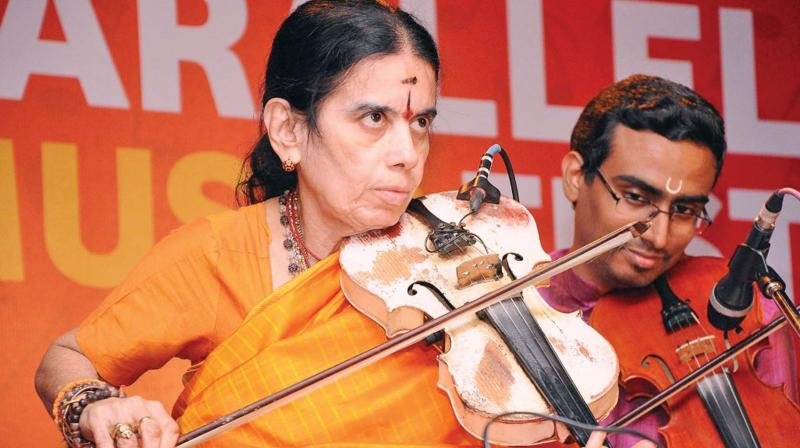 In his remarks in the House of Representatives, Raja Krishnamoorthi said he was especially moved by a recent rendition performed by Avasarala Kanyakumari.

Describing Avasarala Kanyakumari as a wonderful musical ambassador, a top Indian-American lawmaker has said the top-ranking violinist shared the beauty of the Carnatic tradition with music lovers all over the world.

“Kanyakumari is a wonderful musical ambassador, sharing the beauty of the Carnatic tradition with music lovers all over the world,” Indian-American Congressman Raja Krishnamoorthi said.

In his remarks in the House of Representatives, Raja Krishnamoorthi said he was especially moved by a recent rendition of the star-spangled banner on this fourth of July, performed by Kanyakumari and her student disciples.

“Kanyakumari is revered for her commitment to cultivating the next generation of Carnatic musicians. She offers her services without charge, as her way of paying it forward and honouring the contributions made by her teachers to developing her talents,” he said.

Wishing to honour the life and talent of Kanyakumari, a revered master violinist, composer, and teacher in the Indian Carnatic musical tradition, the Indian-American lawmaker said the Indian government recognised her talent and contributions to Indian music and culture with the Padma Shri Award in 2015.

The following year, Kanyakumari was honoured with the Kalaimamani Award from the state of Tamil Nadu, and the prestigious Sangita Kalanidhi Award from the Madras Music Academy.

“Madam Speaker, I want to recognise the contributions of maestro, guru, and composer Avasarala Kanyakumari to Indian music and culture, and the gift of her talent to the millions of devotees of the Carnatic musical tradition,” Raja Krishnamoorthi said.

Born in the city of Guntur in Andhra Pradesh, Kanyakumari began her musical life on the violin at the age of eight.

“Blessed with an abundance of natural talent and nurtured by her family and dedicated teachers, including the eminent violinist Maestro Ivaturi Vijayeswara Rao, Kanyakumari was soon performing in small concerts and building a reputation as a musical prodigy,” he said.

After graduating from high school, Kanyakumari moved to Chennai, where she continued her education and her musical career as an accompanist and soloist of great renown, deeply admired by critics and aficionados alike for her technical skill and exquisite musicality, Raja Krishnamoorthi said.