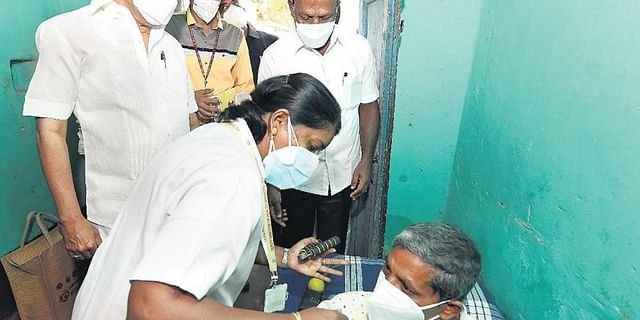 CHENNAI: In just 20 days since the Makkalai Thedi Maruthuvam scheme was launched, as many as 1,98,415 people have received healthcare services at their doorstep in the State. According to data shared by the Health Department, the highest number of scheme beneficiaries (13,589) were in Ramanathapuram district, while Krishnagiri district featured second in the list (12,434).

“The scheme is being expanded into all districts as well as some urban areas, where access to hospitals is minimal. We are now focusing on identifying patients with diabetes and hypertension, which are the main causes of Covid-19 deaths,” said an official with the health department.

Under this scheme, a group of doctors and health staff will screen people aged above 45 years for health issues at their houses. Out of the 1.98 lakh scheme beneficiaries, 6,102 people, who had serious illnesses, were given palliative care, while 6,232 patients were provided physiotherapy service and 30 patients received Continuous Ambulatory Peritoneal Dialysis.

Officials said that out of the total patients screened, about 20 per cent had both hypertension and diabetes, while about 50 per cent of the patients had hypertension alone. Data from the Directorate Of Public Health revealed that 89,070 people had hypertension, and 57,497 had diabetes. Among them, 39,848 had both diabetes and hypertension. “A majority of these patients were diagnosed for the first time. We have been providing them medicines and doing follow up,” the official added.