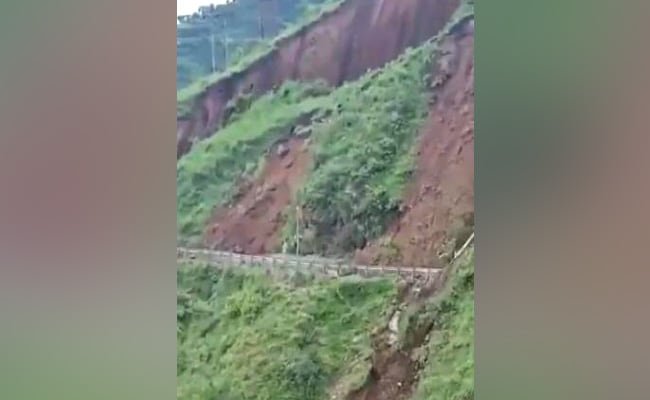 A stretch of road is seen collapsing as a hillside crashes down in dramatic visuals of a landslide that took place in Himachal Pradesh this morning. The road caved at Sirmaur after two days of incessant rain.

A clip that has been widely shared shows a chunk of the hillside falling, taking the road with it. About 100 metres of the road slides down and vanishes in moments. There are no reports of casualties.

A series of cloudbursts, flash floods and landslides have been reported from the region over the past few days.

The road, according to officials, connected two points called Paonta Sahib and Shillai-Hatkori. The National Highway 707 is blocked due to the landslide.

Traffic has been closed in the area and policemen posted at the entry points to warn people to take different routes.

According to reports, the landslide took place near Nahan town.

Last evening, a woman died and nine people were injured when a pickup van fell into a gorge in the same district, according to a state disaster management official quoted by PTI.

As many as 175 tourists are stranded in Lahaul-Spiti in the state after a cloudburst and landslides triggered by heavy rain.