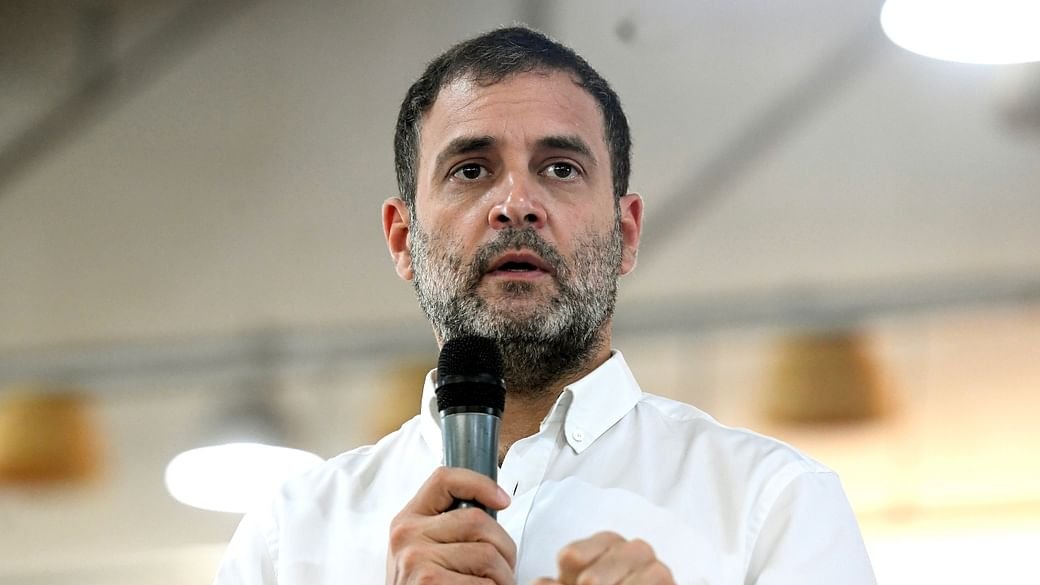 Congress MP Rahul Gandhi is part of the meeting, as are other leaders from his party and from the Shiv Sena, the CPI and CPM, the RJD, the NCP, the AAP and the DMK

The Prime Minister “inserted a weapon in our phones”, used it to “hit the soul of India’s democracy” and now the government is trying to silence opposition demands for a discussion in Parliament, Congress MP Rahul Gandhi said Wednesday.

Mr Gandhi was addressing reporters after a meeting of 14 opposition parties – a meeting to chalk out a strategy to take on the government over the Pegasus phone-hacking scandal, which has triggered protests in, and forced repeated adjournments of, the monsoon session of Parliament.

“The entire opposition is here… our voice is being curtailed in Parliament. We are only asking if the Pegasus software was bought and if it was used against certain persons in India,” Mr Gandhi said.

“I want to ask the people – there is a weapon Narendra Modi has planted in your phones… used against opposition leaders, journalists, activists… should there not be a discussion in Parliament?”

“… if we (the opposition) agree there will be no discussion on Pegasus… the issue will get buried… till the time Pegasus is not discussed in Parliament, we are going nowhere,” he stressed.

To accusations the Congress is “not letting parliament run”, Mr Gandhi – whose name is on the list of alleged surveillance targets – said: “They say we are disturbing parliament (but) we want to fulfill our responsibilities and this is against the democratic process.”

Shiv Sena MP Sanjay Raut, who was part of today’s meeting, stressed the opposition is “united in our stand to protect issues of national security, democracy and farmers’ welfare”.

“Like Rahulji explained, the government has used this weapon as an arrow again democracy and we will not stand for it. This must be discussed in Parliament,” he said, pointing out that statements – such as that read out by IT Minister Ashwini Vaishnaw – did not constitute a discussion.

Apart from the Congress and the Shiv Sena, the CPI and CPM, the Rashtriya Janata Dal, the AAP, the DMK, the NCP, the National Conference and the Samajwadi Party took part in today’s meeting.

The Trinamool Congress – which has announced a first (and so far only) judicial inquiry into the Pegasus allegations – was not present, although MP Derek O’Brien later said the opposition is “100 per cent united”, and that the Congress had been told of his party’s absence today.

Mamata Banerjee, whose nephew and Trinamool MP Abhishek Banerjee is also among the potential targets, met the Prime Minister in Delhi yesterday and pitched for a Supreme Court-led inquiry.

Today’s meet comes after Prime Minister Modi slammed the Congress for “not letting parliament run”. He accused the opposition party of deliberately spurning attempts at resolving the impasse.

Today’s meeting was also after seven opposition parties wrote to President Ram Nath Kovind on Tuesday, asking him to direct the government to discuss Pegasus and farmers’ protests in parliament.

The letter was signed by Mayawati’s Bahujan Samaj Party, the Rashtriya Loktantrik Party, the Akali Dal, the National Conference, and the CPI and CPIM, as well as Sharad Pawar’s NCP.

The Congress was not a signatory to that letter.

It has, however, insisted the government is to blame for the non-functioning of parliament, as it is not agreeing to opposition parties’ “united” demand for a discussion on the Pegasus issue.

The government has, so far, refused a probe into the Pegasus allegations, insisting surveillance of the alleged kind is impossible given existing checks and balances within the country’s legal framework.

With input from PTI

Disclaimer: The NSO group which sells Pegasus to governments and government agencies only, says it is not connected to the leaked database of phone numbers. The Indian government has said there is “no substance” in these reports.