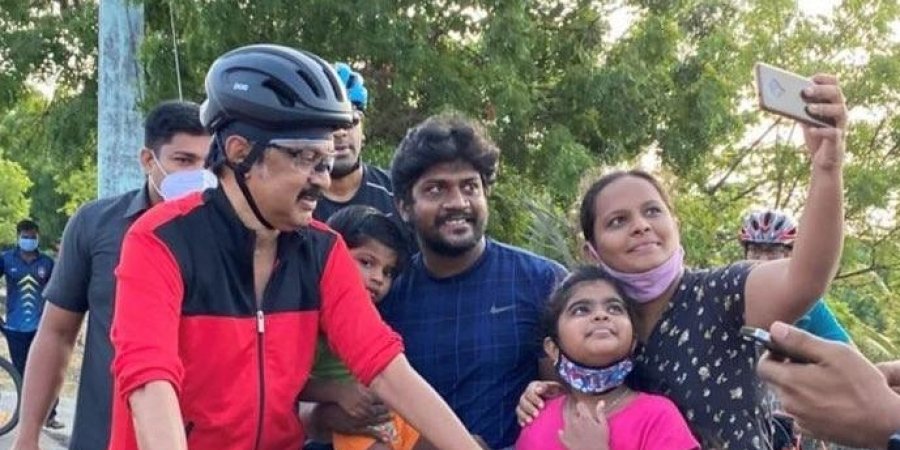 Though cycling is not new to Stalin, it was on Sunday that he was doing the old thing as the new Chief Minister of the State.

TIRUCHY: The scenic ECR, a regular track for cycling enthusiasts, was aflutter on Sunday morning with Chief Minister M K Stalin, in full cycling gear, whizzing past other cyclists and local people.

Though cycling is not new to Stalin, it was on Sunday that he was doing the old thing as the new Chief Minister of the State.

A cyclist and civil engineer by profession, V Karthikeyan, whose greeting was acknowledged by the Chief Minister, had spotted Stalin several times earlier on ECR. But this was the first time he saw him after taking over as Chief Minister.

“We were on our routine ride as a group of four cyclists when another bigger group of cyclists overtook us near Muttukadu around 6 am. In the middle of the riders was the Chief Minister in full cyclist’s gear. We waved and said ‘Good Morning’ and he waved back,” Karthikeyan told The New Indian Express.

Despite a security ring thrown around the Chief Minister, many other passing cyclists took photographs of him and some of them were posted on Strava tracker app, a community application popular among the cyclists. His cycling videos and pictures started trending on other social media platforms as well.

Starting his bicycle ride from Muttukadu around 5.45 am, Stalin waved at all those who saw him and greeted him on the way and did not fail to make his usual pit stop at the teashop named Café 4 U in Kovalam.

Earlier, When Stalin was the Leader of the Opposition, the owner of the café would normally get a prior intimation of his proposed visit to the eatery and he would make arrangements for him to sit and relax for some time.

Pictures of Stalin surrounded by some admirers during his cycling and at the cafe had once gone viral on social media during the run up to the Assembly elections.

But on Sunday, the crowd that gathered to greet him and also to shoot photographs was much bigger, for Karthikeyan had spotted him sipping tea there, too, in the past.

On those occasions, Karthikeyan and his friends would not intrude into the privacy of the Leader of the Opposition relaxing with a few persons. But on Sunday there crowd treated him like a celebrity and Karthikeyan too managed a selfie from a distance.

The normal cycling routine of Stalin was to start at Muttukadu, ride for about 5 km till Café 4 U, enjoy a cuppa and continue riding to Mahabalipuram. “Two or three cars and a few cyclists would accompany him,” Karthikeyan recalled.

However, on Sunday, the cars that accompanied him were more, at least five, and there were a few security personnel thrown in, too, in the retinue, he said.