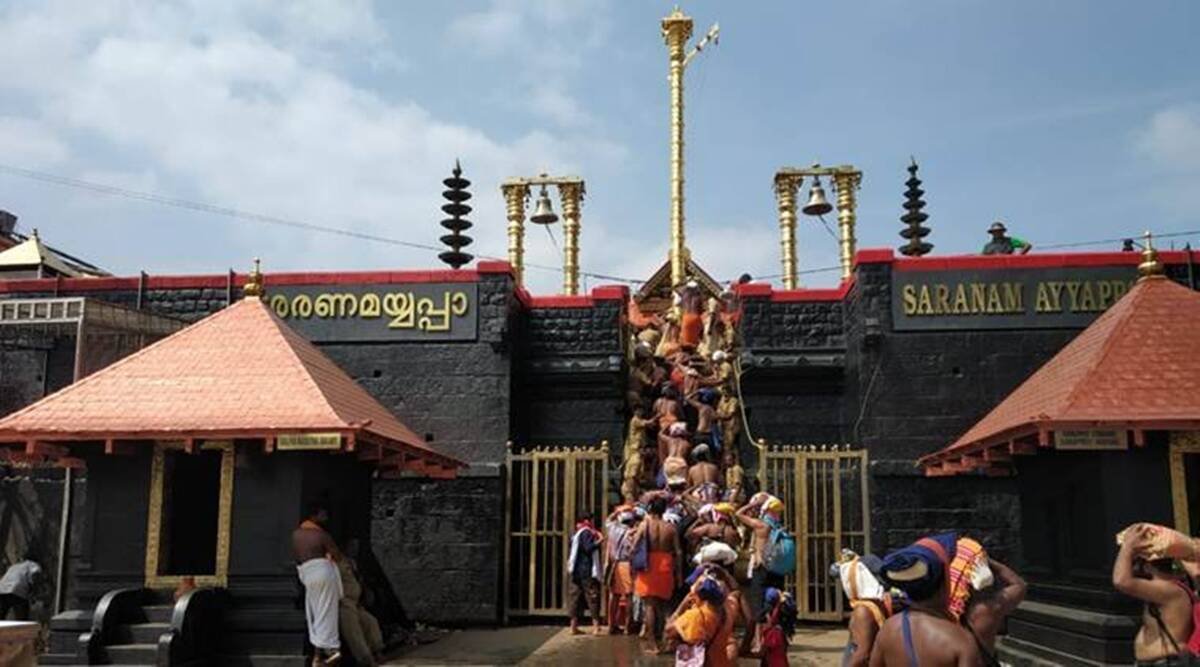 The state government and the Travancore Devaswom Board, that administers the shrine, has strengthened safety arrangements to manage pilgrim crowds at a time when Kerala is experiencing a major spike in infections.

For the first time since the pandemic began, the hilltop shrine at Sabarimala in Kerala will open its doors to pilgrims Friday evening for the five-day prayers in the Malayalam month of Thulam.

The state government and the Travancore Devaswom Board, that administers the shrine, has strengthened safety arrangements to manage pilgrim crowds at a time when Kerala is experiencing a major spike in infections. Daily cases have hovered between 7,000 and 10,0000 in the past two weeks.

To keep a check on the flow of pilgrims, authorities have decided to allow only 250 persons to offer prayers in a day at the temple. Pilgrims have to book time slots for darshan on the virtual queue system of the Kerala Police and make arrangements in accordance. Those below the age of 10 and above 60 are barred from entering the shrine.

Most importantly, all pilgrims must produce a Covid-negative certificate obtained in the last 48 hours and a medical fitness certificate attesting that they are healthy to undertake the nearly 5-km-long trek from the base at Pamba to the shrine at the top of the hill. Masks are mandatory while entering the temple though it has been made optional while climbing the hill citing health concerns. They must practice social distancing while undertaking the trek. Hospitals have been set up at the hilltop, Pamba and Nilackal to deal with emergency cases, the government said.

The practice of taking a dip in the Pamba river before climbing the hill has also been revoked. Instead, showers have been installed at the river-bank for bathing purposes.

As opposed to previous years, devotees cannot extend their stay at the shrine or at Pamba post offering prayers in view of the safety protocols. They must return to Nilackal, where expansive parking facilities have been arranged. Pilgrims can rest at Nilackal subject to a few hours before returning home. Instead of state transport buses offering chain services between Nilackal and Pamba, private cars and vans will be allowed to go up till Pamba, drop the pilgrims and return to Nilackal. However, routine state bus services will be operated from Pathanamthitta to Pamba.

The temple will be open for pilgrims till October 21. On Saturday, October 17, the new appointments for posts of head priests of Sabarimala and Malikappuram temples will be made through a draw of lots.

HC nod to state govt for acquiring land for airport

The Kerala High Court Friday gave the nod for the state government to acquire land of the Cheruvally Estate for the proposed greenfield airport near Sabarimala.

In July, the High Court had stayed a government order directing the Kottayam district collector to acquire the estate on a petition filed by Ayana Charitable Trust (formerly known as Gospel for Asia), Thiruvalla. The 2263-acre property had been sold to Gospel for Asia by the tea plantations company Harrisons Malayalam Limited in 2005. However, the deal fell foul after the government attached around 38,000 acres of land, including the Cheruvally estate, declaring it as revenue land. The petitioners in the case contended that the government must pay compensation for the land.

It was in 2017 that the state government decided to build an airport on public-private-partnership (PPP) model at Cheruvally Estate land for the benefit of crores of pilgrims who visit Sabarimala every year. Besides, residents of Kottayam and Pathanamthitta districts can also depend on the airport. If the airport becomes a reality, Kerala will have five airports, the most in any state.