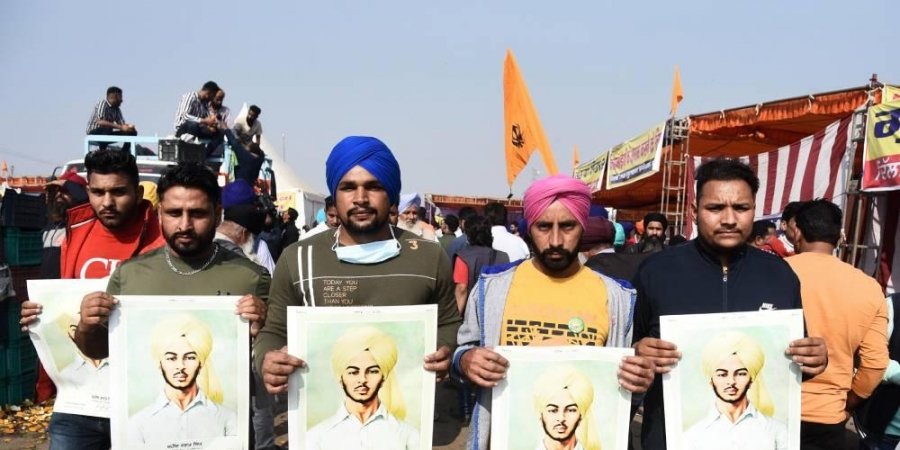 Addressing a press conference at a protest site on the Singhu border, they said the “super bandh” made the government open its “eyes and ears”.

NEW DELHI: Farmer leaders claimed on Tuesday their ‘Bharat Bandh’ against the new farm laws was “successful” and had an impact in 25 states.

Addressing a press conference at a protest site on the Singhu border, they said the “super bandh” made the government open its “eyes and ears”.

The farmer leaders said the protestors did not go to Burari ground as it is an “open jail” and demanded that Ramlila Ground be given to them.

They stressed that they don’t want to trouble the people of Delhi and Haryana.

Punjab Kisan Union president Ruldu Singh Mansa said a 13-member delegation of farmers’ representatives will seek a “yes or no” to their demands when they meet Union Home Minister Amit Shah on Tuesday evening.

“The ‘Bharat Bandh’ against the new farm laws was successful and had an impact in 25 states. It was ‘super bandh’ from Kashmir to Kanyakumari,” Haryana Bharatiya Kisan Union president Gurnam Singh Chaduni said.

The meeting between Shah and the 13-member farmer leaders’ comes a day before their sixth round of talks with Union ministers slated for Wednesday.

“There is no midway. We will demand just ‘yes’ or ‘no’ from Home Minister Amit Shah at today’s meeting,” Mansa said.

The central government now knows it doesn’t have a way out.

They will have to withdraw the three new farm laws and guarantee minimum support prices for crops, he said.

He claimed the central government has bowed down before the ‘Bharat Bandh’.

“When the first four meetings did not lead to any breakthrough, we went silent in the fifth one and demanded that the government answer in ‘yes or no’,” Mansa said.

“We will rest only when we make the government accept all our demands,” he said.

BKU leader Bhog Singh Mansa said the farmers will hold discussions after the meeting with Shah and announce their future course of action on Wednesday.

The nationwide shutdown was observed in around 10,000 places in 25 states, added Swaraj India leader Yogendra Yadav.

“It was a historic day. Nobody thought the bandh will be successful on such short notice. It has made the government open its eyes and ears,” he said.

Fishermen, sand mine and stone quarry workers, industrial federation, students, railway personnel federation, intellectuals and writers all supported the bandh, he claimed, adding “it became successful because every citizen of India made it his own protest”.

Besides Punjab and Haryana, the ‘bandh’ was “successful” in states like Telangana, Tripura, Assam, Karnataka, Tamil Nadu and Maharashtra, he claimed, adding social activist Anna Hazare also observed a ‘symbolic fast’ in support of the protesting farmers.

Yadav alleged that around 200 farmer leaders were detained in Gujarat, and there were reports that many were arrested in Uttar Pradesh.

A PIL seeking to allow farmers, who are protesting at several border points of the national capital against the new farm laws, to protest at the designated place by following COVID-19 uidelines has been filed in the Supreme Court.

The plea filed by Delhi-based lawyer Reepak Kansal has sought framing guidelines to balance citizens right to protest with right to free access and movement.

“The petitioner seeks indulgence of this Court to protect and safeguard the human and fundamental rights of protesting farmers who are not allowed to enter in Delhi for peaceful protest and on other hand citizens of the country who have been suffering due to said gathering of protestors at borders of Delhi. The right of free access and movement of general public and protesting farmers are infringed due to blocked roads/ borders of Delhi by the law enforcing agencies / respondents,” the plea said.

The plea said States have an obligation to respect the right of protest and should not prevent, hinder or restrict right to protest.

“In the present protest, the respondents have failed to fulfill their respective obligation even-after several requests made by the groups of farmers to protest peacefully at the designated places for protest.”

“Ignoring the requests of the protestors, the respondents have used excess force by using lathi charge, tear gas shells and water cannon in winter season on the protestors,” the plea said.

The PIL has also sought direction not to use force on the protesting farmers who have been protesting peacefully.