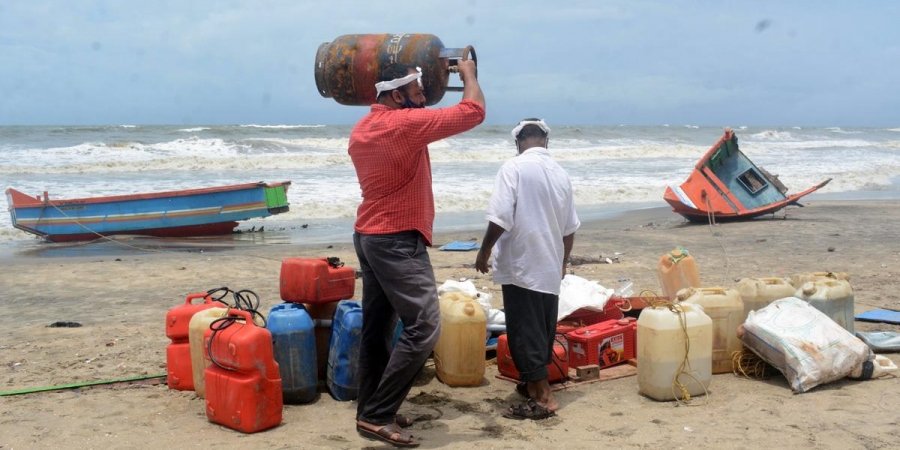 The sea was turbulent. A few wooden planks and life jackets were all they had.

KOCHI:  The sea was turbulent. A few wooden planks and life jackets were all they had. They were staring at death. It was a sheer test of willpower for the six fishermen from Ponnani who were stranded midsea when their boat sunk around 3.30am on Monday. Clinging to the wooden planks, they swam for 12 hours covering nearly 30km before they were spotted by the fishermen from Ponnani who had launched a search operation in eight boats. It was an epic tale of survival against all odds.

The fishermen — Nazar, 40, Shefeer, 35, Munavir, 36, Kunjanbava 53, Subair, 40, and Swapnasaro Senapat, 52, a native of Odisha — were taken to Ponnani Government Hospital, where they were given first aid after which they returned home. The six fishermen had set off from Ponnani on Friday on ‘Mahalaxmi’, the boat Nazar and his friend Shafi recently bought.

‘We swam clinging on to wooden planks till rescue workers came’

The fishermen cast their net in the fishing ground off Kollam coast and were returning with the catch on Sunday night when water started gushing in through a hole in the hull of their boat. As all efforts to plug the hole failed, they contacted fishermen at Ponnani, who alerted the fisheries department. The boat was located around 3 nautical miles off Edamuttom beach near Nattika in Thrissur district at that time.

Though the fisheries authorities in Thrissur deployed a boat for rescue operation, the team had to return due to rough sea conditions. In the morning, the Coast Guard deployed a ship and a helicopter for search and rescue but they could not spot the fishermen or the boat. Around 3.45 pm, the eight fishing boats that were scouring the sea off Ambathodu coast in Malappuram district spotted the fishermen and saved them.

“We shared our location and waited from 10pm to 4am. The boat then sank and we caught hold of some wooden planks to escape. Subair, who lost his life jacket, took the lid of the store room to stay afloat. We swam clinging on to the wooden planks till rescue workers came,” said Kunjanbava.“It is incredible. We were anxious as the search team from Coast Guard and fisheries department could not spot the boat or the fishermen. We were in touch with them till 4am, but lost contact after that. But the fishing boat workers here were not willing to give up and they launched a search which yielded result,” said Shafi, the owner of the boat.

Missing TN fishers return to safety at Beypore
Kozhikode: Five fishermen from Kanyakumari who went missing at sea since September 4 returned back to safety at Beypore on Monday morning. The boat they had travelled in from Feroke Chaliyam, ‘St Nicholas’, was wrecked in the torrential rain and heavy wind on Sunday. They were rescued by another fishing boat pressed into service by the coast guard on Monday, said the coastal police at Beypore.

Coastal police rescue  2 fishermen in Azhikode
Thrissur: The Azhikode coastal police on Monday rescued two fishermen who were stranded in the sea after strong waves partially damaged their boat. Alappuzha natives Paliyath Aneesh, 40, and Pallikkathai Ponnan, 44, were rescued after their fibre boat Santa Maria was damaged about five nautical miles from the Azhikode lighthouse leaving them stranded.

Mid-sea trouble
Five fishermen from Kanyakumari who went missing in sea after their boat was destroyed in heavy rain and wind on September 4, returned to safety at Beypore on Monday morning Three fishermen, who ventured into the sea from Tanur and Ponnani, go missing after their boats capsized on Sunday Coastal police on Monday rescued two fishermen who were stranded in the sea after strong waves damaged their boat off Azhikkode coast

Two from Tanur, one from Ponnani yet to be traced
Malappuram: Three fishermen — two from Tanur and one from Ponnani — went missing after their boats capsized in rough weather on Sunday. A daylong search on Monday by the Coast Guard and the fisheries department, aided by fishermen, did not bear fruit. Those missing from Tanur are Kettungal Kunhumon and Kunhalakath Ubaid, while Kabeer Marakadavu is the Ponnani native. Three of the five from Tanur who set out in a fibre boat at 11am on Sunday managed to swim back. Kabeer was accompanied by three others, who too swam to safety.