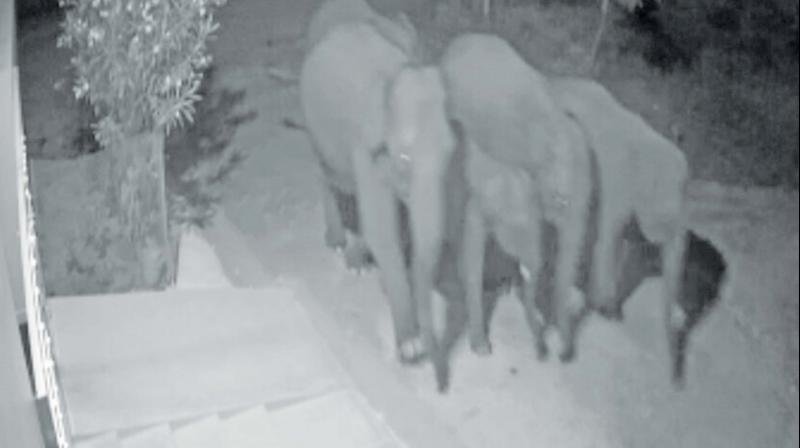 Wildlife activists have again sounded their call to the government and concerned departments to remove the encroachments.

Coimbatore: A new herd of six elephants including two calves entered a residential area in the Coimbatore forest division during the early hours of Wednesday, triggering panic.

Wildlife activists have again sounded their call to the government and concerned departments to remove the encroachments in the elephant’s migratory path.

While the forest department is involved in trans-locating wild tusker ‘Arisi Raja’, a new herd of six wild elephants entered Laxmi Nagar near Thudiyaloor – Kathirnaickenpalayam during the early hours of Wednesday.

On hearing a peculiar barking sound of stray dogs in their street, residents who came out of their houses to investigate, rushed inside in shock on finding a herd of wild elephants.

Activist T. J. Shobana told, the elephant menace continued in the Coimbatore forest division for over a decade. Translocation of so called ‘problematic’ wild elephants is not a permanent solution. If so, how many can be done? it’s a shame on the forest department and the government remaining mute spectators without removing the legal and illegal structures in the elephant’s migratory paths, including mats, education institutions and resorts, particularly, the CRPF training academy at Pannimadai, which built its wall for 3.25 km, blocking a vital migratory path of elephants.

A couple of years ago, an elephant herd knocked down the CRPF academy wall, but they again constructed the wall with additional strengthening materials.

The silence on the part of the government remaining without creating an awareness on eco-conservation, but merely announcing elephant as ‘national heritage animal’ and ‘scheduled animal’ is a shame.

“Without taking proper action to remove the legal and illegal man-made structures in the forests, this menace cannot be stopped. At least now, the Central government should boldly come forward to implement the Madhav Gadgil Committee recommendations for a better environment for the next generation children. it’s their responsibility too,” added the activist.