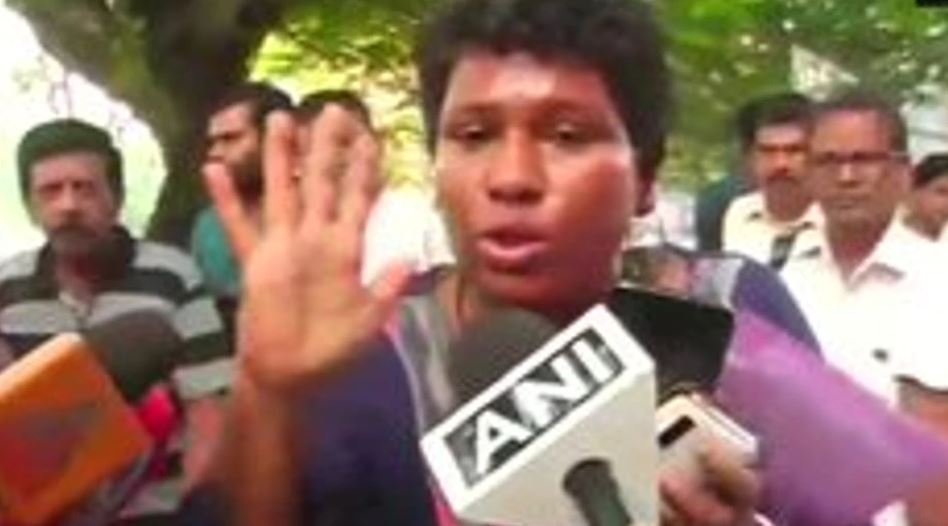 Bindu Ammini and Trupti Desai had come at the Kochi Police commissioner’s office to seek security for their visit to the Sabarimala temple in Pathanamthitta district.

Bindu Ammini, one of the two women who had managed to enter Kerala’s Sabarimala temple in January, was on Monday attacked with chili powder at the police commissioner’s office in Kochi while she was on her way to the hilltop shrine along with rights activist Trupti Desai.

Bindu Ammini and Trupti Desai had come at the Kochi Police commissioner’s office to seek security for their visit to the Sabarimala temple in Pathanamthitta district.

“Protesters tried to manhandle me,” claimed Bindu as protesters swirled outside the Kochi Police commissioner’s office.

Ammini has now been taken to a hospital and Trupti Desai is still inside the office.

Protesters have vowed to block their entry to the hilltop shrine after Trupti Desai, who arrived at Kochi airport in the morning.

“There is no stay on the 2018 verdict which allowed women of all ages to worship at the temple,” the Bhumata Brigade leader said earlier.

“Today is the 70th Constitution day and an ideal day to break the age-old taboo. If anyone blocks us, we will move court with a contempt plea. I already sent a communique to the state CM and DGP regarding my trip. It is their duty to provide protection to us,” she said. The Left-run government in Kerala has said it would not provide protection to women in traditionally-barred age group unless they get a court order.

The Supreme Court lifted the centuries-old ban on female worshippers of menstruating age last year but it recently decided to refer review pleas against its judgement to a larger bench following which the state government has adopted a cautious approach and made it clear Sabarimala was not a place for activism.

Police had earlier refused to give security cover to controversial activist Rehana Fathima to enter the Lord Ayyappa temple in Sabarimala. Fathima, who is in her 30s, had made an attempt to enter the hill shrine in October last year with police protection but was forced to return in the wake of massive protests by devotees.

Trupti Desai said she will resort to a fast if she is not allowed to go up and force the police to give a written reply stating why she was blocked.

There are no protests but reports suggest many workers of the Sabarimala Karma Samiti are waiting to block her from going ahead. Police are on alert and unlikely to allow them to trek to the temple.

“There is no change in our stance. Pilgrims will block them,” said Hindu Aikya Vedi leader RV Babu.

He also asked the police not to repeat last year’s incidents.

“We are not aware of her trip. Let the police and government decide it. We still feel that there is some lack of some clarity in the last verdict,” said Travancore Devasom Board (TDB) president N Vasu.

The TDB runs the hill temple.

Police fear protest in Nilakkal and Pambha base camps as protesters slowly assembled in many areas.

The Bharatiya Janata Party, which has been supporting protesters, activists and others are trying to vitiate the peaceful atmosphere of the temple, said BJP.

“We will not allow them to break age-old customs,” said party leader Padmakumar.

The Supreme Court’s judgment in September 2018 upheld the right to equality of worship and allowed the entry of all women to the shrine, triggering widespread protests in Kerala.

Traditionalists contend that the entry of female worshippers of childbearing age into the sanctum sanctorum in Sabarimala is sacrilege because Lord Ayyappa, the presiding deity, is celibate.

Bindu Ammini and her friend Kanakdurga were the two women who had succeeded in praying inside the inner sanctum under police protection since the court’s order last September even as about a dozen attempted to do so.