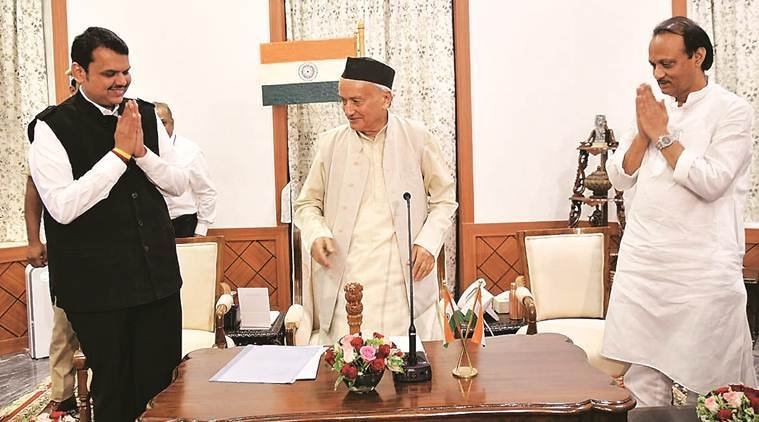 When the fig leaf of decency is gone, the minimal requirements of rule of law can be thrown out of the window as useless appendages to the elixir of power. This is what Maharashtra is witnessing.

As a student of political science, writing on political whodunits is not easy for this writer. But when the mystery intersects with political institutions and democratic norms, it becomes necessary to separate the comically mysterious from the serious political questions. In the age of new Chanakyas, after all, students of political science need to learn the skills to decipher improbable whodunits than talk of outdated ideas of democracy.

To win the tag of neutrality, an observer may as well duck under the routine anguish that “all” parties have failed democracy. But a clearer apportionment of criminal responsibility for undermining both the letter and spirit of the Constitution is demanded by the developments in Maharashtra. With all qualifiers and nuances, such apportionment must not run away from the fact that the ruling party at the Centre chose to make its ugly contribution to further degeneration of democracy.

Of course, when such disrespect is inflicted on democratic practice, it is often a more collective crime. In this case, all parties contributed their bit, but institutional mechanisms too succumbed like a house of cards. This failure has the crowning story of the Supreme Court postponing the most essential task of forcing a floor test on the not-too-enthusiastic claimant of a majority.

Having failed to fare as well as (it) expected in the assembly election, the BJP fell out with its three decade-old partner and was hence unable to form the government when the governor first asked it to. The proposed coalition of the Sena-NCP-Congress may not be an ideal solution. But one does not have to be scandalised by the fact that, post-election, some parties tried openly to negotiate and arrive at a formula to run the government. This is not unheard of in parliamentary democracy.

It is also not a big issue that in each of these three parties there would be differences of views about such a post-election coalition. Even if any of these three parties were to split on this issue, there would be no reason to brood over it. After all, splits have occurred in India’s parties often. This script suddenly changed sometime during Friday night-Saturday morning (November 22-23). It is not clear if there indeed was a politically sustainable split in the NCP. But it is clear that the governor got suddenly convinced that the BJP now enjoyed a working majority. Having convinced himself of this, the governor was also in a “tearing hurry” to shoot a letter to the president to revoke President’s Rule. He then administered oath to the CM and deputy CM rather early in the day. Thus unfolded the all-too familiar story of institutional failure.

The first institution to fall was the governor’s office — as in many other states. Next came the president. In the early hours of the 23rd morning, he revoked Article 356. One does not have to go into the merits of the BJP’s claim to have a majority. But the question is: Why within the early hours of the morning was that claim accepted and acted upon? To complete the circle of institutional abdication, the court, instead of following the precedent of imposing a stiff deadline for a floor test, chose to defer the hearing from Sunday to Monday to Tuesday.

This serial miscarriage of institutional norms took place in the backdrop of an unsavoury political drama. This has, so far, had three acts. The first was marked by the Sena-BJP break-up. The fear that the BJP would marginalise it combined with a surge of political ambition and dictated the Shiv Sena move to sever ties. This is something the JDU will be keenly watching. The BJP’s unwillingness to accept coalition dynamics, alongwith its insatiable search for power, pushed the party into exploring the advantages of factionalism within rival parties.

The second act of the drama belongs to the Congress. Despite its inaction both before and after the election, the party came close to sharing power. But it refused to take any decision quickly. Apart from its prevarication and inanity in appointing all kinds of observers, this episode exposed the absence of formal state-level mechanisms for taking decisions. A party that blames Modi for centralisation unabashedly centralised this state-level decision. The two key bodies — state legislature party and state executive committee — should have been the legitimate decision-makers. The delay caused by the Congress allowed crucial space to the BJP to plan its intrigue.

The final act of the drama belonged to the NCP. Reportedly, Ajit Pawar used a letter signed in advance by the party legislators. But has anyone asked him — the governor should have asked this but was perhaps too sleepy to ask — when was it that the party legislators met and decided to support the BJP? Are there minutes of that meeting?

It is also a sad comment on the long career of Sharad Pawar, for two reasons. One, speculation continues about whether he knew about this. The fact that observers should associate him with almost anything, is a rather damning footnote that casts a long shadow over his political biography. His meeting with Modi last week only added to this suspicion. Secondly, Sharad Pawar cannot escape the criticism that he has developed a political clan. As it happens with large and multi-generational family enterprises, intra-family factionalism spills out. Beyond personal failure, the entire episode brings back the larger question: What does the NCP stand for and has it lived beyond its natural life? Having stagnated at the level it was at in 1999, Ajit Pawar’s action may just have brought that existential question to the forefront.

But in the developments of last week, more is involved than mere reputations of leaders and futures of parties. While a floor test alone should determine the fate of the new Fadnavis government, the Saturday stroke has done durable damage to the idea of competitive politics — when all-round failure of politics takes place and is coupled with institutional abdication and chicanery, small-time violations of principles and practices of parliamentary democracy begin to masquerade as chanakya niti. Rigging of institutions is celebrated as democracy.

Current developments in Maharashtra symbolise this failure of politics. One is not sure if Marathi pride will bloat or sink in shame that the state has joined its neighbours, Goa and Karnataka, in undermining democracy in such a manner that public cynicism replaces popular trust in electoral party politics. When the fig leaf of decency is gone, the minimal requirements of rule of law can be thrown out of the window as useless appendages to the elixir of power. This is what Maharashtra is witnessing.