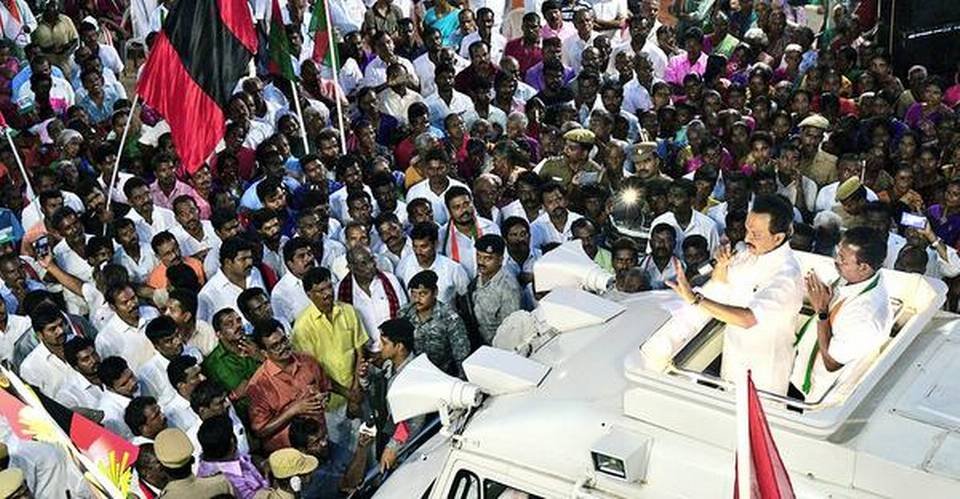 DMK president M.K. Stalin on Thursday urged the electorate in Nanguneri Assembly constituency to vote for the Congress candidate Ruby R. Manoharan in the October 21 bypoll and send out a message to all of Tamil Naduto defeat the AIADMK government in the next elections.

Canvassing votes for Mr. Manoharan at Parappadi, the DMK president touched upon the alleged efforts of the Centre to impose Hindi and Sanskrit in Tamil Nadu. He said though the DMK was not against learning any new language, it would never allow the authoritarian attitude of imposing something like ‘one culture, one language’ on Tamil Nadu.

He accused the AIADMK government of having spread a red carpet to youth from other States to get employment in government departments though the recruitment was conducted by the Tamil Nadu Public Service Commission.

“Hence, this anti-people corrupt rule, being controlled and guarded by the BJP at the Centre to push its agenda in Tamil Nadu without any resistance, should be thrown out by the voters. To begin with, the Nanguneri electorate should give the wake-up call to the voters across Tamil Nadu, who gave a thumping victory to the Secular Progressive Alliance in the recently held Parliamentary polls,” Mr. Stalin said.

Citing the Pollachi sexual assault case, he charged that there was no safety for women and children under the AIADMK government. “More than 250 women had been sexually assaulted over the past eight years at Pollachi with the help of a son of an ‘AIADMK VIP’. After a banner killed a youth Raghu in Coimbatore, another banner put up by an AIADMK functionary to welcome Deputy Chief Minister O. Panneerselvam killed young software engineer Subasri, who was about to travel to Canada for an assignment. However, none of the AIADMK leaders visited the victim’s family, which lost its only daughter,” Mr. Stalin said.

Questioning the success of the Global Investors Meet, he said, if the government could line up a few thousand beneficiaries of two GIMs (2015 & 2019), the DMK would organise a fitting felicitation to this government.

Mr. Stalin said the government had claimed that the second GIM had attracted investments worth ₹3 lakh crore through 304 Memoranda of Understanding while the first GIM, organised under the leadership of then Chief Minister Jayalalithaa, had reportedly got consent for ₹2.42 lakh-worth investments.