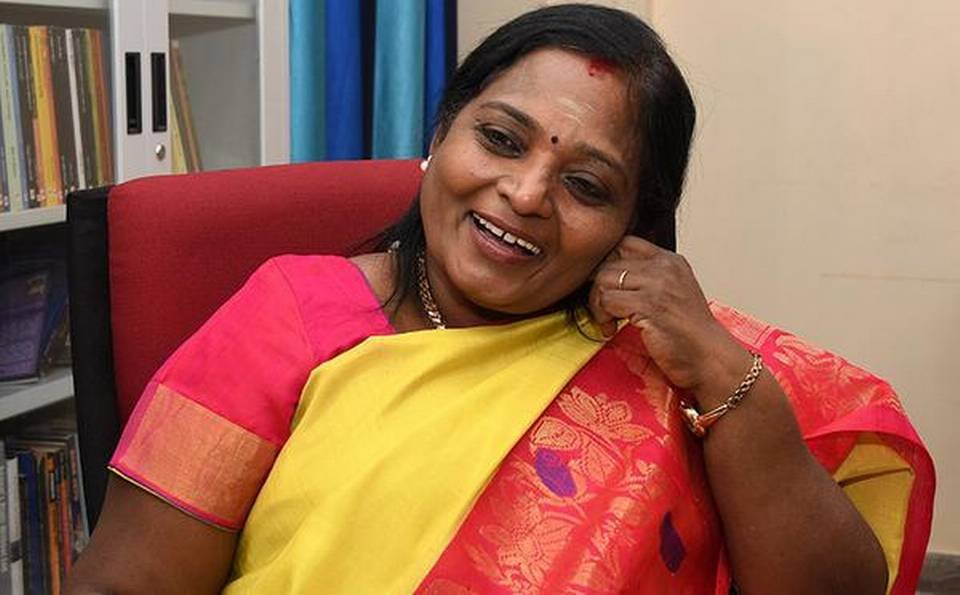 Will set an example for others, says newly-appointed Telangana Governor

Tamil Nadu BJP president Tamilisai Soundararajan had no inkling of what was in store when she received a call on Saturday night, seeking some details from her. On Sunday morning, President Ram Nath Kovind called the BJP leader and broke the news that she had been appointed the Governor of Telangana. In an interview, Ms. Soundararajan said her elevation will enable her to work harder for the welfare of the people. Excerpts:

Do you see this gubernatorial assignment as a reward for your work?

Definitely. I have been working non-stop in this party for nearly 20 years. In 2001, I became the zonal in-charge of two to three districts. Right from the grass-roots level, I have held almost every position in the party. I unsuccessfully contested two Assembly and two Parliamentary elections. I was true and committed to the party, its leaders and its cadre. This is an opportunity to serve the nation. The party has shown me as an example of the fact that if you work hard, the party will look after you. This reward is a message to the workers about the greatness of my party.

What has been your Congressman-father’s reaction to your elevation?

I have not seen my father yet. I was very casual today. I was about to go to a marriage. Suddenly, the President called me. Yesterday, they asked me my full name and everything, but I didn’t know what position they were giving me. I came to know that only after the President called. My father would have been very happy. Leaving my father and being away [from him] — it was a critical situation as a daughter, but not as a leader. Relatives of mine who had not been talking to me because I joined the BJP have been calling me since morning. I thank [Prime Minister Narendra] Modi ji for having hope in me and giving me this position. Working against the tide was very challenging.

Are you happy with your stint as BJP State president?

With our combined efforts, we enrolled 44 lakh members in this critical State. Except for one or two days, I toured the State. The party knows that I am a very straightforward and honest person. I am non-corrupt, qualified, eloquent and fully committed to the party.

There is speculation that with this elevation, your political career has come to a standstill…

I don’t see it that way. This is a great opportunity. This is not the end. As a politician, I wanted to become the people’s representative; now, I am going to deliver speeches as the Governor, as the representative of so many people. I don’t think it [her political career] has come to a standstill. Rather, I will say it is still going on.

Your plans as Governor…

I will set an example for others. Right from my childhood, whenever I have taken up a task, I have been an achiever. I will do my work with full commitment. I am an ordinary woman from a Tamil family. I am approachable. Even as Governor, I will set an example for others. By doing my best, I will express my gratitude to Modi ji, [BJP leaders] Amit Shah ji and J.P. Nadda ji.

You had been saying ‘Lotus will bloom in Tamil Nadu’. Now, will that happen in Telangana?

Definitely, it will bloom in T.N. The party is already making inroads into Telangana. But I can’t speak politically anymore. I can do so much for the welfare of the people in this post within the purview of the law. It’s a Constitutional post. Whatever heights I reach, simplicity and approachability [are attributes] I will maintain even as Governor.

You have been the subject of memes. Your message to the ‘meme boys’…

I always tell them to use this creativity for positive purposes. Instead of using it to target Tamilisai, use it to spread positivity and create social awareness.

I appreciate their capacity to think and edit. Tamilisai’ya vechi senjiteenga (you guys have trolled Tamilisai mercilessly)! If they want to continue, let them continue. I don’t take these things to heart.