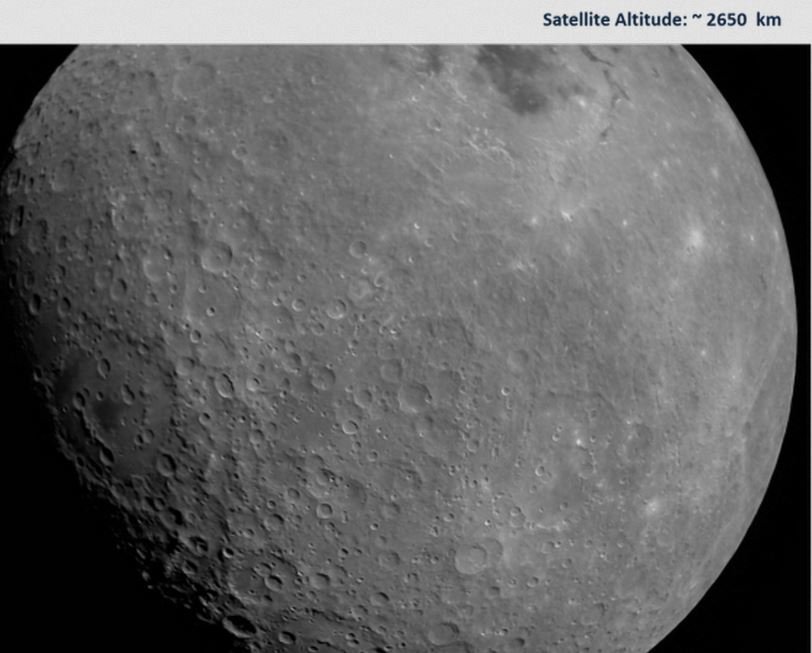 The Indian Space Research Organisation has released the first moon image captured by Chandrayaan 2. The image was taken at a height of about 2,650 km from the lunar surface, ISRO tweeted. The Mare Orientale basin and Apollo craters are identified in the picture tweeted by ISRO.

On August 4, ISRO released the first picture of the Earth captured by Chandrayaan 2’s Vikram Lander.

On August 21, Chandrayaan 2, a day old in its orbit around the moon, started undergoing phased manoeuvres to shorten the elliptical orbit in preparation for the September 7 landing. ISRO said it compressed the current elliptical orbit to 4,412 km at the far end from the moon. The orbit exercise was performed for about 20 minutes from 12.50 p.m. by firing the onboard motors.

Earlier in the day, ISRO chief K. Sivan said the crucial process of taking up soft landing of the Vikram Lander will be taken up in the early hours of September 7.

ISRO scientists in Bengaluru would be engaged in this process which is expected to be completed by 1.55 a.m., he told reporters at the airport in Chennai on August 22. “It is expected to make a soft landing (on the surface of the moon) at around 1.40 a.m. and (the process will be) completed by 1.55 a.m. At the global level this is an important mission. It is being keenly watched by everyone,” he said.

Elaborating about the complexity involved, he said the speed of the spacecraft needs to be brought down to “zero”.

Chandrayaan 2 successfully entered the lunar orbit on August 20 by performing the Lunar Orbit Insertion (LOI) manoeuvre. The second such manoeuvre was successfully performed on August 21. The next lunar bound orbit manoeuvre is scheduled for August 28 between 5.30 a.m. and 6.30 a.m. IST.

After two more manoeuvres, the Lander will separate from the Orbiter on September 2 and enter into a 100kmX30km orbit around the moon.

Then it will perform a series of complex braking manoeuvres to soft land in the South Pole region of the moon.