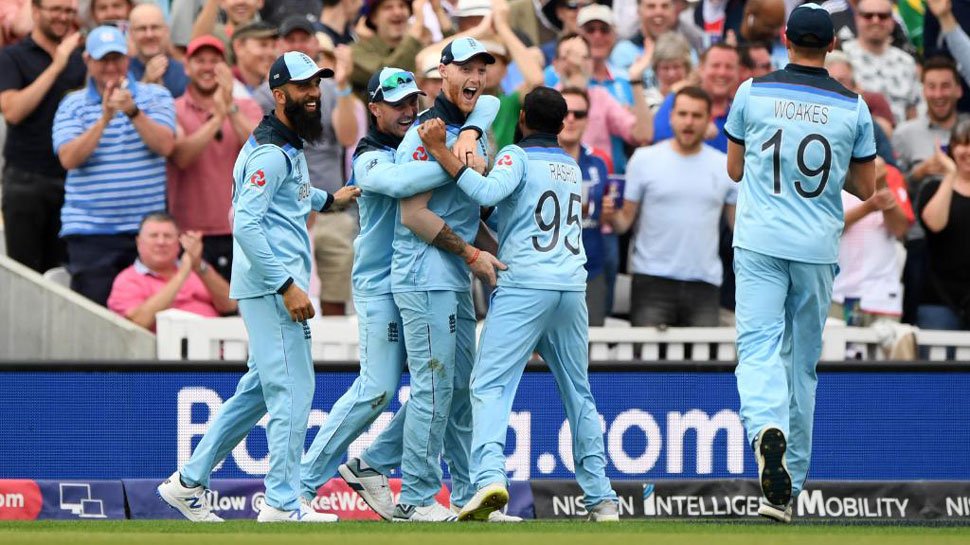 Kane Williamson‘s New Zealand cricket team are locked in a shootout for the ICC Cricket World Cup 2019 semi-finals with hosts and top-ranked England and Pakistan.

Beat Australia at Lord’s on Saturday, and New Zealand are into the semi-finals. Lose, and their match with England on July 3 in Durham becomes a quarter-final if England, on eight points, manage to beat India in Birmingham on June 30. If New Zealand lose to Australia and England lose to India, then New Zealand will go through on 11 points even before they meet Eoin Morgan’s at Chester-le-Street.

The Blackcaps also have to keep an eye on Pakistan, who need to beat Afghanistan in Leeds on June 29 and Bangladesh at Lord’s on July 5 to stay in contention for the semi-finals.

If England lost both their remaining matches, they will stay on eight points. If Pakistan win one, they will move past them to nine points. Win both, and Pakistan will surge into the semi-finals on 11 points.

Sri Lanka’s defeat to relegated South Africa on Friday leaves them needing to beat West Indies and India to get to 10 points, from where they could potentially be in contention should Pakistan lose their remaining matches.

India, the only unbeaten team in the World Cup, will reach the semi-finals with victory in one of their three pending matches: versus England on June 30, Bangladesh on July 2 and Sri Lanka on July 6.

According to Williamson, having to beat one of table-toppers Australia and England to lock a semi-final spot is not a situation he envisioned a week ago, when his team was unbeaten, but despite this being a tight contest at Lord’s he was not daunted.

“You come to tournaments and sides beat each other and they climb the ladder, and that’s what everybody sort of desires to do, and who remains is kind of the ones that go through. But at the end the day, you’re trying to play the best cricket that you can to try and put yourself in one of those top four positions,” he said. “There’s so many games of cricket; that so many different things can happen. We know in this sport the variables and uncontrollables we can come up against on any given day, and perhaps some sides might be more suited to certain conditions than others on a certain day, and that’s just the nature of the beast.

“England have got a couple of games coming up, but they are still in a strong position, as are a few other sides. The focus I think probably for all of those sides, is to keep trying to apply what they know holds themselves in the strongest position which the sort of cricket they want to play, which is equally different to one another. When the time comes and the round-robin’s finished, if you can hang your hat on that, then at the end of the day, you can either walk away and end up in a semi-final, or know that you’ve done that and it hasn’t quite happened.”

This is New Zealand’s first match of the World Cup at Lord’s, where Australia beat England earlier this week. Williamson and his team have arrived from a run of four matches in the cooler climes of the midlands – Nottingham, Birmingham and Manchester – and now head into the warmest day of the tournament so far, with temperatures in London expected to hit 35 degrees.

“The conditions will be a little bit different to perhaps what they experienced the other day. It’s also one of those things you can’t control. So not worrying about it is probably the more important thing,” said Williamson. “For us, it’s once again, trying to adapt as quickly as possible, and stick to the sort of cricket that we want to play to give ourselves the best chance.

“The atmospheres have varied a lot. Pakistan was very loud. Bangladesh, very loud. India, we didn’t even play and they were very loud,” he added with a chuckle. “You know, I guess coming tomorrow, usually you come to Lord’s and there’s sort of a quiet murmur when you play England, but I guess playing Australia it might be a little bit different when you have Kiwis and Australians filling out the seats. It will be a really good atmosphere, whatever it is, but I know for a fact that both teams are just looking forward to getting into the cricket.”