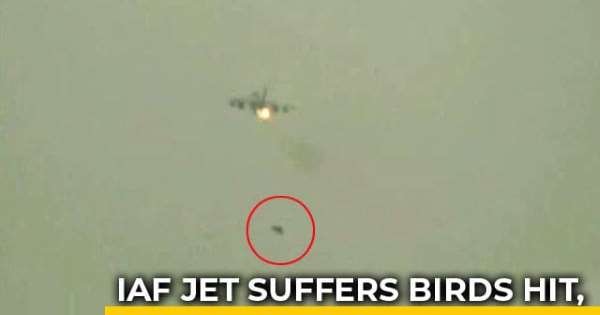 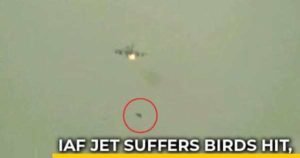 An Indian Air Force pilot’s presence of mind and swift response may have saved his life and potentially those on the ground when the fighter jet he was flying ran into birds on Thursday morning in Haryana. Dramatic video of the incident released today shows just how the close the encounter really was.

As the IAF Jaguar aircraft, loaded with two additional fuel drop tanks and Carrier Bomb Light Stores pods (used to store practice bombs), is seen taking off for a training mission in Ambala, it is soon hit by a flock of birds which results in the failure of one of its engines.

The video shows the two detachable fuel tanks and practice bombs known as Carrier Bomb Light Stores (CBLS) pods being dropped off from the plane, triggering an explosion and a ball of fire that set the dry bushes near the runway ablaze, leaving the area covered with smoke.

#WATCH: On the morning of 27 June, an IAF Jaguar aircraft loaded with two additional fuel drop tanks & Carrier Bomb Light Stores
(CBLS) pods took off from AFS Ambala for a training
mission. Immediately after take off, the aircraft encountered a flock of
birds. (1/3) pic.twitter.com/hNJN0dzo26

“The pilot jettisoned his fuel tanks and external stores, including some 10 kg practice bombs, to gain height and managed to land back safely,” Air Force officials told news agency ANI.

During in-flight emergencies, which this was, pilots are often required to drop under-wing stores such as bombs and external fuel tanks.

There were no reports of any casualties.