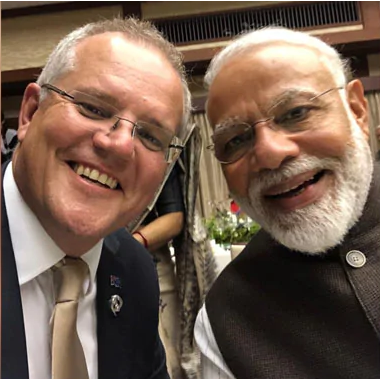 Australian Prime Minister Scott Morrison tweeted a selfie that he took with Prime Minister Narendra Modi at the G20 Summit in Osaka in Japan this morning. The first day of the Summit on Friday was dominated by public shows of bonhomie, though on the second day today all eyes turn to a pivotal trade showdown between economic rivals China and the US.

“Kithana acha he Modi! #G20OsakaSummit,” Mr Morrison, in a blue suit, tweeted. PM Modi is seen in a brown jacket over white attire in the photo. Both of them are smiling.

PM Modi also met with US President Donald Trump again this morning before the session of the G20 reopened. The Prime Minister on Friday put forward a five-point approach to address common challenges facing the world, including protectionism, unilateralism at global financial organisations like the World Trade Organisation (WTO), and terrorism.

Mr Trump and Chinese President Xi Jinping will meet today in a bid to thrash out a truce in a long-running trade war that has seen hundreds of billions of dollars in tit-for-tat tariffs.

“Rapidly changing technologies such as digitisation and climate change are concerns not just for us, but also for the future generations. Development is in the right direction when it reduces inequality and contributes to empowerment,” PM Modi said at the G20 Summit on Friday.

Terror is the biggest threat to all humanity, he said. “It not only takes the lives of innocent people, but also has a negative effect on economic progress and social stability,” the Prime Minister said.

Scott Morrison held on to power in May after a surprise surge in national elections that left some experts making comparisons to President Donald Trump’s poll-defying win in 2016.