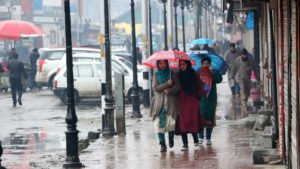 New Delhi: Several parts of Jammu and Kashmir and Himachal Pradesh could get heavy rain or snow on Wednesday and Thursday, predicted the Indian Meteorological Department. The plains of Punjab, Haryana and Delhi too could get light showers starting Monday.

An induced cyclonic circulation may form over western Rajasthan by Tuesday and it could combine with moisture-laden winds from the Arabian Sea to result in rainfall in north-west India over the Western Himalayan Region. As a result, the IMD has said that widespread rainfall and possible snowfall could be witnessed in J&K and Himachal Pradesh while some parts of Uttarakhand too can get rainfall over the next five days.

The upper reaches of J&K and Himachal Pradesh may also witness thunderstorm with hailstorm starting Tuesday.

The weather pattern could result in scattered rains across Punjab, Haryana, Chandigarh, Delhi and northern Rajasthan.