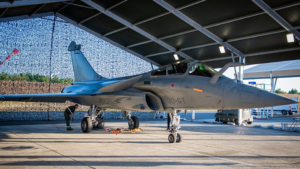 While India has finalised the procurement of 36 Rafale fighter jets from France, neighbouring Pakistan has reached out to China for speedy procurement of JF-17 planes. Even before the Indian Air Force (IAF) gets the 36 Rafale fighters in a fly-away condition from Dassault Aviation, Pakistan Air Force (PAF) is attempting to add as many as 62 JF-17 jets.

But who has the edge? Where do Rafale and JF-17 stand when compared to each other? Here’s a look at the specifications of Rafale and JF-17, which are set to power the IAF and PAF, respectively.

Rafale fighter jet has its origin in 2001 and has been developed by French company Dassault Aviation. On the other hand JF-17 was developed in 2007 jointly by Aviation Industry Corporation of China and the Pakistan Aeronautical Complex.

The Rafale jet is equipped with standard outfitted 30 mm GIAT 30/M791 internal canon, which can fire up to 125 rounds. Besides, each jet has 14 external hardpoints that can carry air-to-air and air-to-surface missiles, precision-guided weapons, fuel tanks etc.

In JF-17, the standard armament is a 23 mm GSh-23-2 twin barrel internal cannon. Apart from this, the jet has seven external hardpoints to carry a range of air-to-air and air-to-surface munitions.