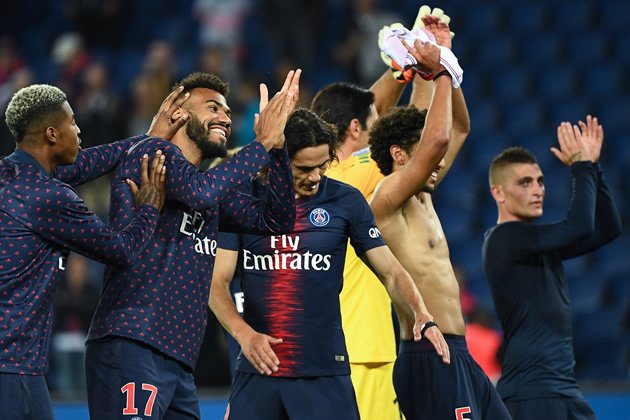 Paris Saint-Germain set a new club record on Wednesday when a 4-1 victory over Reims gave them a seventh win from seven games this season and an eight-point lead in Ligue 1. With a perfect 21 points, new coach Thomas Tuchel surpassed the previous best start of 19 points by predecessor Unai Emery last season. The champions can now claim another slice of history on Saturday where a victory over Nice will allow PSG to equal Lille’s all-time record of eight wins at the start of a season set back in 1936-1937.

But Edinson Cavani levelled after five minutes and then won the 24th-minute penalty which was converted by Neymar.

Uruguay striker Cavani hit the third before half-time to take his season’s goal tally to five, the same as Neymar.

Thomas Meunier tucked away the fourth in the 55th minute after being set up by young striker Moussa Diaby much to the delight of watching US basketball legend Michael Jordan in town for this week’s Ryder Cup.

“We are very happy to be the team to set the record,” said Tuchel. “It was a big objective tonight, a great motivation for us to win and write this team into the club’s record books.”

Moussa Dembele scored his first two goals for Lyon in two minutes in Dijon to set his team on course for an 3-0 victory that lifted them into second in Ligue 1.

The 22-year old striker, who joined from Celtic on August 31, scored the opener after 17 minutes with a first-time chip over the goalkeeper and two minutes later added a second, acrobatically putting home a rebound.

Martin Terrier headed a third in the 35th minute.

Lyon are on 13 points from seven games, eight behind PSG.

Lille, who started the evening in second, lost 1-0 at Bordeaux. Francois Kamano put the home team ahead after just seven minutes.

The other two teams who could have climbed to second, Marseille and Montpellier played games that followed similar patterns until the dying seconds.

Montpellier fell behind at Caen to a goal by Saif-Eddine Khaoui after 10 minutes.

Andy Delort and Damien Le Tallec resplied and put the visitors ahead and, briefly, second in the league. But Yacine Bammou leveled after 64 minutes.

Seven minutes from time, Montpellier’s Vitorino Hilton was sent off for a wild sliding tackle. Caen created dangerous chances, but Montpellier held on to draw 2-2.

In Marseille, Kenny Lala broke away and put Strasboug ahead after 27 minutes.

The home team replied twice just before half time.

After Florian Thauvin was sent flying in the 41st minute, Dimitri Payet coolly converted the penalty.

Then Morgan Sanson curled a shot inside the post to put Marseille ahead on the stroke of half time.

After Jordan Amavi received a straight red in the 52nd minute the 10 men of Marseille held out until the 89th minute when Nuno Da Costa leveled for the visitors.

Marseille responded with one last attack, and Valerie Germain met a low cross with a ferocious shot to secure a 3-2 win.