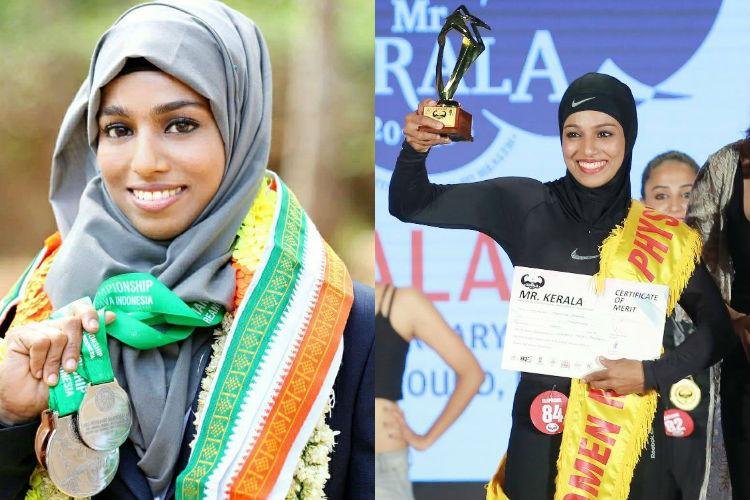 Majiziya Bhanu , today, is a name that does not require any introduction. She has become an inspiration for all the women across and in the country. Majiziya, a 23 year old BDS final year student is a female fitness model  and probably the first ever hijab-clad female fitness model of Kerala. Yes, you read it right. This lady has pulled off the entire competition wearing hijab.  She won the Ms. Kerala fitness and physique championship which was held recently this year in Kochi.

Majiziya Bhanu was always interested in athletics and sports since her very childhood. She was deeply passionate about boxing in 2016 unfortunately she had to quit it because she used to have braces on at that time which was not allowed as it posed as a danger in ring. She is also a national champion in arm wrestling. Then she moved her attention towards  power lifting that proved to be fruitful as it won her the title of “strong woman of Kerala” not once but thrice ,  by the Kerala Power lifting Association. It is also worth mentioning here, that she also won silver medal in the Asian Power lifting Championship of 2017. And the list of her achievement goes on and on and on. She’s been adding feathers in her cap with her go-and-get-it attitude.

It is more intriguing to know the story of her entering into fitness and physique  biz. The same is considered to be a male dominant business but Majiziya’s unique attire and confidence helped her pave her way to success . She has built her own identity without sacrificing her beliefs and values.

Like many woman of our country Bhanu was quite apprehensive about fitness competitions  for obvious reasons. As this involved a lot of skin show she was gravely hesitant to step into it, but then after watching various videos of many Egyptian Women and Middle Eastern Female fitness models she decided to follow their style and costumes.

They say life is not a bed of roses but a bunch of thorns, I guess they were pretty much right as well. Bhanu then had one more problem popping out of the hole – Posing. She did not know how to pose , she was so damn nervous to even smile let alone posing. Her co-contestants, male fitness taught her how to pose and the officials made her understand how important it was to smile in order to enhance the performance. As the time passed, she became more confident. Talking about her attire she once mentioned in her interview that the clothes were not a problem since the judges were experienced and they knew how to analyze a clothed body.

While battling so many things one needs a constant support system to rely on. Her family has always been there in times of need. She recalls that her parents knew about her inclination towards sports and did anything and everything they could do to help her out.  It was her family and friends who encouraged her to go beyond mediocrity and fulfill her dreams.

Majiziya is now planning to take part in the upcoming world  Championship which is going to be held at Antalya, Turkey next month. She is participating in as many as three sports- Power lifting, fitness modeling and arm wrestling. Cool, right?  She has made us all proud. And she is going to do that for n times in coming future. Best of Luck Lady.