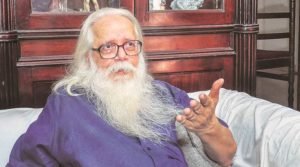 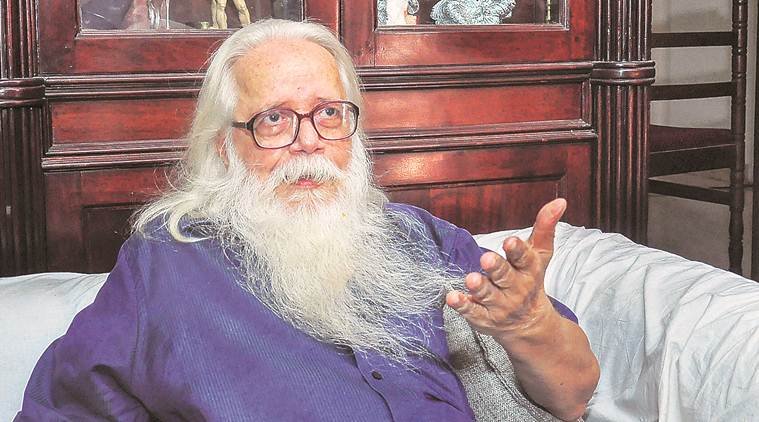 Along with S Nambi Narayanan, another former Indian Space Research Organisation (ISRO) scientist D Sasikumar was also arrested in 1994 and then acquitted in 1998 in the ISRO spy case. Unlike Nambi Narayanan, Sasikumar is not looking to seek compensation for the false allegations against him.

But, he is willing to lay bare the truth behind the fake case before a committee set up by the Supreme Court to investigate the wrongful arrests in the case. The case, Sasikumar said Monday, not only sacrificed national interest but set the Indian space program back by decades.

Sasikumar (79), one of the first generation of scientists at ISRO, who lives in Thiruvananthapuram after his retirement in 1999, is happy that his former colleague Dr Narayanan was awarded a compensation of Rs 50 lakh by the Supreme Court last week for the trouble he underwent on account of the false case but is of the personal view that money cannot compensate the losses.

“In the course of this whole story, national interest has been sacrificed because of someone’s thoughtless, stupid actions. It is not just a few individuals who have suffered because of these actions. The whole country has suffered. The Indian space programme got delayed by so many years,” he said. “The ISRO spy case was a problem created by some people for certain reasons. It is not just one case and if you look at it closely, it is three cases. There is a third phase where there was a political outcome of ousting a chief minister and all that — this had nothing to do with ISRO or the spy case.”

The foisting of the case and its subsequent spiralling into the hands of politicians resulted in ISRO’s programmes, including efforts to master the cryogenic engine technology offered by the Russians — now being used in the GSLV rockets — being set back by several years, he said.

“All that we could have got from Russia as a birthright – equipment and technology – which cannot be obtained by money alone, all those sources were cut off. They became hostile towards us. We had easy access to Russian facilities at the time. This case caused humiliation not just to us but to our counterparts in Russia. This kind of loss is very great and cannot be quantified,’” he said.

According to him, all those accused in the spy case suffered and would need to be compensated in the event of any move to make up for the injustice.

“If you look at the case impartially you will see that innocent people have suffered. There is no one talking for them. I have not seen anyone speaking for them. It is not just a collapse of human rights in India, it is a collapse of human rights at the international level. I feel ashamed as an Indian. What did they do that was so wrong?” he said.

Sasikumar said that K Chandrashekhar, the Indian representative of the Russian space agency Glavkosmos, who was also accused in the spy case died in Bengaluru on Sunday while another person accused in the case S K Sharma, a businessman, is terminally ill.

Until the time of his arrest in 1994, Narayanan had had a distinguished scientific career, with strong accomplishments.

“Chandra died a pauper. He was in the hospital in his last days. The poor fellow could not settle his bills. He was the Indian representative of a Russian company and he was in a good position. His last days were lived in misery. There is also Sharma who is also nothing now. None of us made fortunes. He was inducted into the story. He is terminally ill right now in Bangalore,’’ Sasikumar said.

Two Maldivian women Mariam Rasheeda and Fousiya Hasan were the others booked in the spy case in 1994 by Kerala police. “There are also the two Maldivian ladies. What the Indian administration did to them is a great crime. They were in the custody of the police for nearly two to three years. They did not finally run away to the Maldives. They returned legally after being acquitted. This means that the entire thing was done illegally,” he said.

“I agree Nambi should be compensated but what about the others? If a compensation is offered to me I may offer it to the Prime Minister’s relief fund or the chief minister’s relief fund. I don’t want money which is earned like this but I will love it if people who committed this crime are punished. This is acceptable. If they are left free it is not acceptable – in my view,” said the retired scientist.

“I have no interest in pursuing compensation but for a settlement for all those treated unjustly, I will offer all support to the committee set up by the Supreme Court… If I am asked by the committee to appear in front of them then I will definitely tell them. I will give it in writing because I don’t want any hanky-panky to follow tomorrow.”

“It is like this – suppose you go for a movie leaving the doors to your house open a thief will enter. The politicians found an opportunity to go in and they entered. The root cause – who created it is quite clear. A very small fellow for a small purpose he did it and it got carried by some organised setups like police and all that. They carried someone else’s child,” he said.

“Such a thing should not happen again. All of you must study this incident in depth. Don’t promote one individual or one organisation. You should assess what is useful to the country. This must not happen in India again,” he said.