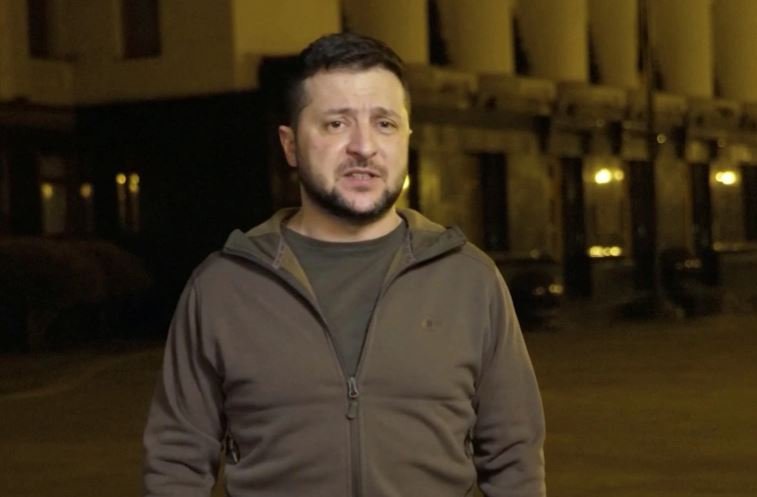 Ukraine’s leader calls for global solidarity, says he expects ‘serious’ action from NATO and the West to end the month-long war.

Ukraine’s President Volodymyr Zelenskyy has called for global protests to demand an end to the Russian invasion of his country, while also urging NATO to provide Kyiv with “effective and unrestricted” aid to end the bloody war.

Zelenskyy’s call for solidarity late on Wednesday came as the Russian invasion entered its second month and as NATO members and Western leaders prepared for a series of key summits in Brussels.

“Come from your offices, your homes, your schools and universities, come in the name of peace,” the Ukrainian leader said in an emotional video address that was recorded in the dark near the presidential offices in Kyiv. “Come with Ukrainian symbols to support Ukraine, to support freedom, to support life.

When Russia invaded Ukraine on February 24, many experts expected a swift toppling of Ukraine’s government. But with Wednesday marking four full weeks of fighting, Moscow appears bogged down in a grinding military campaign.

The month-long conflict has killed and wounded thousands of people and driven a quarter of Ukraine’s population of 44 million from their homes.

NATO estimates that 7,000 to 15,000 Russian soldiers have been killed in four weeks, a figure that stands in stark contrast to the 15,000 soldiers Russia lost over 10 years in Afghanistan.

In its latest update on March 2, Moscow said nearly 500 soldiers had been killed and nearly 1,600 wounded.

Ukraine has also released little information about its own military losses, and the West has not given an estimate, but Zelenskyy said nearly two weeks ago that about 1,300 Ukrainian servicemen had been killed.

Ukraine also claims to have killed six Russian generals. Russia acknowledges one general having been killed.

The fighting has also laid large areas of some Ukrainian cities to waste, with satellite pictures from the US firm Maxar Technologies showing buildings in cities such as besieged Mariupol and Chernihiv on fire.

The mounting death toll and destruction of civilian buildings has prompted the United States and rights groups to accuse Russia of war crimes.

Zelenskyy, in his Wednesday address, said he expected “serious steps” from the NATO and Western leaders and appealed to Western countries to stay united in the face of Russia’s efforts to “lobby its interests” with “some partners” to bring them over to its side.

“We will see who is a friend, who is a partner and who has sold out and betrayed us,” he said. “Together we should not allow Russia to break anyone in NATO, the EU or G7, to break them and drag them to the side of war.”

He also noted that Ukraine has not received the fighter jets or modern air-defence systems it requested.

“We ask that the alliance declare that it will fully assist Ukraine to win this war, clear our territory of the invaders and restore peace in Ukraine,” he said.

“It has been a month of defending ourselves from attempts to destroy us, wipe us off the face of the earth,” he added.

“We have lasted six times longer than the enemy had planned … but the Russian troops are destroying our cities, killing civilians indiscriminately, raping women, kidnapping children, shooting refugees, capturing aid columns, and looting.”