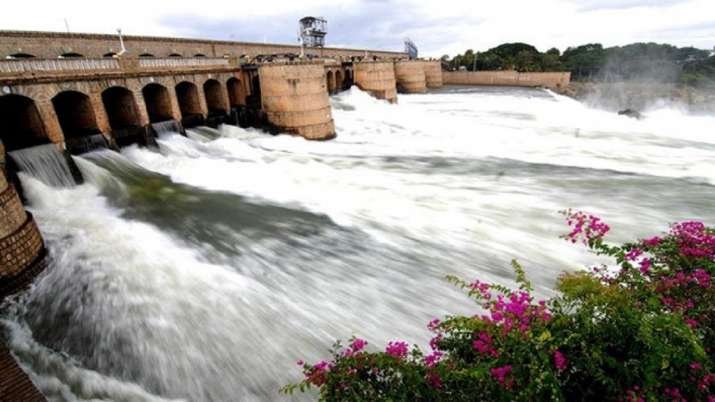 Tamil Nadu Chief Minister M K Stalin on Monday ruled out scope for talks with Karnataka over the Mekedatu dam issue. Based on the Centre’s assurances, his government is confident that Karnataka cannot go ahead in its initiative and legal options would also be pursued in the dam matter, Stalin told reporters in the national capital after calling on President Ram Nath Kovind.

Tamil Nadu Chief Minister M K Stalin on Monday ruled out scope for talks with Karnataka over the Mekedatu dam issue. Based on the Centre’s assurances, his government is confident that Karnataka cannot go ahead in its initiative and legal options would also be pursued in the dam matter, Stalin told reporters in the national capital after calling on President Ram Nath Kovind.

Stalin said the Tamil Nadu government has decided to commemorate the centenary of the Assembly, set up in 1921 and known then as the Madras Legislative Council, which was the first elected body of the then Madras Presidency.

The Chief Minister said he requested the President to preside over the commemoration of the centenary of the first elected House of people which he accepted and the event would also see the unveiling of the portrait of former Chief Minister M Karunanidhi in the Assembly.

Kovind also has agreed to lay the foundation stones for a library in Madurai, and in Chennai, a government hospital and a pillar to commemorate 75 years of independence, he said, adding, the President said he would give his appointment for the proposed event in a couple of days.

Asked if he took up any Tamil Nadu related issues with Kovind like the NEET or release of the seven Rajiv Gandhi assassination case convicts, he replied in the negative.

On the issue of convicts, Stalin said he wrote to Kovind seeking their release as soon as he assumed office in May as the Chief Minister.

“The matter is in court, we have to pursue legal measures and we will continue to raise our voice (seeking their release),” he said.

On Karnataka exerting pressure on the Centre over the Mekedatu dam issue, Stalin said he had sought steps against the neighboring state’s bid to build a reservoir across Cauvery when he met Prime Minister Narendra Modi recently.

Also, days ago when a delegation of parties represented in the Tamil Nadu Assembly met Union Jal Shakti Minister Gajendra Singh Shekhawat, had assured that Karnataka cannot go ahead (as it had not fulfilled conditions for preparation of Detailed Project Report).

Asked on Karnataka Chief Minister B S Yediyurappa’s assertions that the dam would be built, Stalin said the government is confident that the initiative cannot progress based on the assurances of the Prime Minister and Jal Shakti Minister. “The matter is also in the Supreme Court. We will face it legally.”

Whether Tamil Nadu would take part in talks over the Mekedatu issue if Karnataka chose to invite its neighbour, Stalin said, “there is no scope for talks, this has been made clear by our (Water Resources) Minister (Duraimurugan).”

If he would convene a meeting of Chief Ministers of the other riparian state of Kerala and the union territory of Puducherry, he said presently, there was no necessity for it.

According to the state Assembly portal, the Madras Legislative Council was set up in 1921 under the Government of India Act 1919.

The council’s term was for three years and it had 132 members of which, 34 were nominated by the Governor and the rest were elected. It met for the first time on January 9, 1921, at Fort St. George in Chennai, then known as Madras.

The council was inaugurated by the Duke of Connaught, a paternal uncle of the King of England, on January 12, 1921, on the request made by Governor Lord Wellington. The Governor addressed the Council on February 14, 1921.