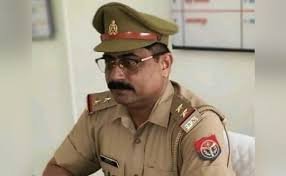 Inspector Indrajeet Singh Bhadauriya, 47, was a native of UP’s Unnao district and is survived by his wife and two children – a daughter and a son

An Uttar Pradesh Police inspector who tested negative for the COVID-19 virus twice in eight days died at a Lucknow hospital on Wednesday, a few days after he was admitted and a third test revealed him to be coronavirus-positive.

Inspector Indrajeet Singh Bhadauriya, 47, was a native of UP’s Unnao district who joined the police force as a Constable in 1989. He was promoted to a Sub-Inspector’s post in 2013 and promoted to the position of Inspector only a month ago.

Mr Bhadauriya had attended a session at a police training school in the state’s Meerut district, returning to Shahjahpur, his district of posting on July 23. On his return he complained of a cough and nasal congestion that became progressively worse of the following week.

He was tested for the COVID-19 virus between July 23 and July 31. Both these returned a negative result.

According to the Superintendent of Police (SP) for Shahjahnpur, the first negative test was a RAT (rapid antigen test) that is quicker but less reliable. His second test was the RT-PCR test that is seen as being more reliable. This too, however, returned a negative result.

However, as his symptoms worsened he was admitted to a hospital in state capital Lucknow before being shifted to another facility, where he died August 5.

Inspector Bhadauriya is survived by his wife and two children – a daughter and a son.

Uttar Pradesh has reported over one lakh Covid cases so far, of which more than 1,900 are deaths linked to the infectious virus and more than 43,000 are active cases.

This morning the state – the most populous in India – was among five to report most new cases (4,586) and most deaths (61) in the previous 24 hours, according to government data.

Also this morning India crossed the 20 lakh-mark in COVID-19 cases; it took just three weeks for the country’s coronavirus count to double after it crossed the 10 lakh-mark on July 17.