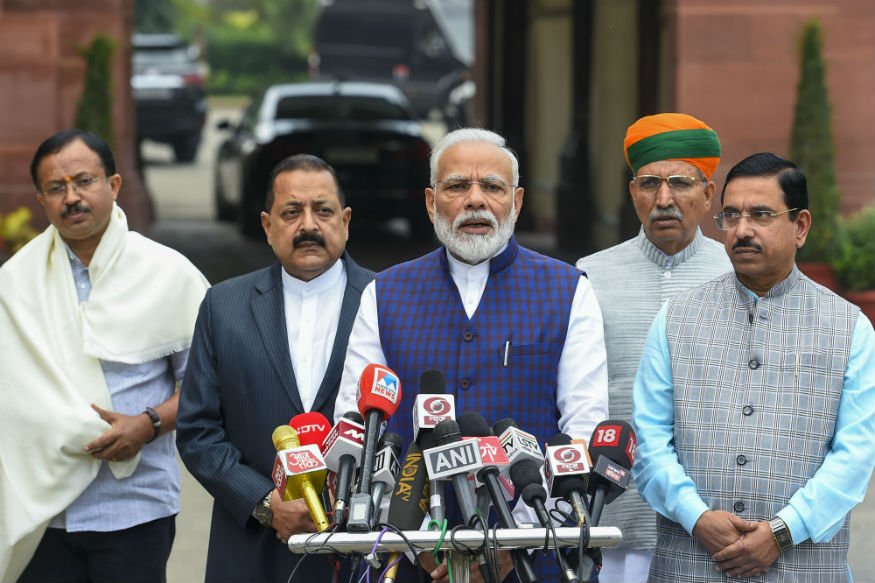 The winter session is from November 18 to December 13 and the government is bracing for heated exchanges with the opposition ready to raise the issues like economic slowdown and the still in effect shutdown in Kashmir after the repeal of special status in August.

New Delhi: Prime Minister Narendra Modi on Monday said he hoped for “frank discussions on all matters” in his address before the start of the winter session of Parliament.

During the session, which will be the last session of Parliament in 2019, there should be high quality of debates in which all MPs should contribute, Modi told reporters outside the Parliament House as he urged the opposition to have “constructive and high-quality debates” that would take the nation forward.

“We want the best of best debates and hope all parties will contribute in a positive and proactive way, as they did in the previous session,” PM Modi said.

The winter session is from November 18 to December 13 and the government is bracing for heated exchanges with the opposition ready to raise the issues like economic slowdown and the still in effect shutdown in Kashmir after the repeal of special status in August.

“In the previous session, unprecedented achievements took place, not only because of the treasury benches but also because of the positive role played by all parties,” the PM added.

At an all-party meeting on the eve of the session on Sunday, Modi had asserted that the government is ready to discuss every issue and exhorted everyone to make the Winter session as productive as the last one.

After the BJP-led NDA left the opposition stunned in the last session by winning over independent regional parties, especially in Rajya Sabha where treasury benches lacked majority, and wooing a number of rival leaders to get a host of bills passed, the Congress-led grouping has some reasons to feel emboldened over recent political developments.

Its better than expected show in the recent assembly polls, BJP’s break in ties with Shiv Sena and reports of economic slowdown have put wind in the sails of opposition parties. The 18 Sena MPs in Lok Sabha and three in Rajya Sabha have now been allotted seats in the opposition rows after the party severed ties with its longtime ally BJP and is in talks with the Congress-NCP alliance to form government in Maharashtra.

The government has listed Citizenship (amendment) Bill, a key BJP plank which is aimed at granting nationality to non-Muslim immigrants from neighbouring countries, for passage in this session.

The Modi government had introduced the bill in its previous tenure as well but could not push it through due to vehement protests by opposition parties, which criticised the bill as discriminatory on religious grounds.