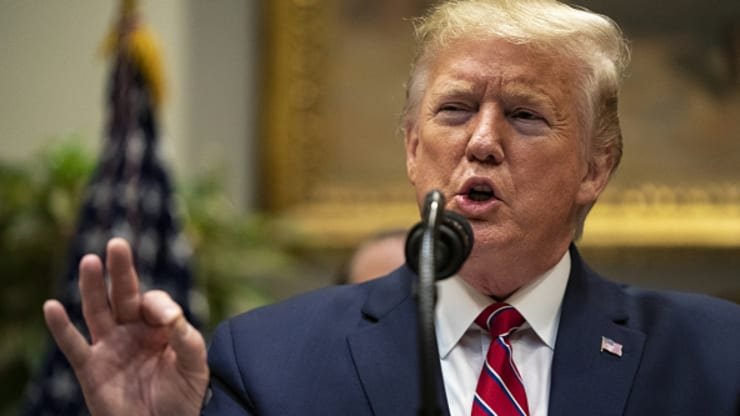 President Donald Trump on Sunday attacked Jennifer Williams, a special advisor to Vice President Mike Pence, a day after the House Intelligence Committee released testimony in which she called the July 25 phone call between Trump and Ukraine President Volodymyr Zelensky “unusual and inappropriate.”

“Tell Jennifer Williams, whoever that is, to read BOTH transcripts of the presidential calls, & see the just released statement from Ukraine,” the president wrote on Twitter. “Then she should meet with the other Never Trumpers, who I don’t know & mostly never even heard of, & work out a better presidential attack!”

A spokesperson for the vice president’s office, responding to a request for comment on Trump’s remarks, simply said “Jennifer is a State Department employee.”

While Williams is a State Department employee, she has been detailed to Pence’s national security council staff to work on issues related to Europe and Russia.

In the phone call, Trump asked Zelensky to investigate former Vice President Joe Biden and his son Hunter. Since then, House Democrats have launched an impeachment inquiry against the president over allegations that he violated his oath of office and jeopardized U.S. national security by asking a foreign leader to investigate a political rival for personal gain.

Williams, in her closed-door deposition, said that the call “shed some light on possible other motivations” for freezing nearly $400 million in military aid to Ukraine. She also said she viewed Trump’s requests for investigations as politically motivated.

“I found the specific references to be — to be more specific to the president in nature, to his personal political agenda, as opposed to a broader … foreign policy objective of the United States,” Williams said.

She also said her notes from the phone call indicate that Zelensky mentioned the gas company Burisma, where Hunter Biden had a seat on the board. However, the White House record of the call did not include any mention of Burisma.

Another witness in the impeachment inquiry, the National Security Council’s Ukraine expert Lt. Col Alexander Vindman, had previously raised concerns that key words were omitted from the White House transcript.

Williams also testified that she was told that Trump asked Pence not to attend Zelensky’s inauguration in May, and was never given a reason for that request.

One concern in the impeachment investigation has centered on Pence’s role in the Ukraine dealings, as officials investigate whether or not he knew that Trump was looking for investigations into the Bidens.

The House of Representatives on Saturday also released the closed-door deposition of National Security Council official Timothy Morrison, who was also on the call.

In his testimony, Morrison said he advised lawyers on the NSC to restrict access to the written record of the call, as the contents would be “damaging” if leaked.

Williams and Morrison are scheduled to testify publicly next week.

Committee Chairman Adam Schiff, D-Calif., referred to Trump’s tweet during the hearing and asked Yovanovitch how the president’s attacks could affect other witnesses in the impeachment inquiry.