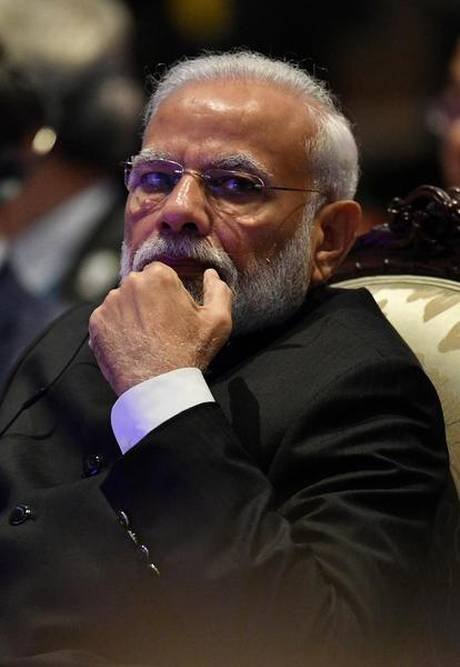 Prime Minister Narendra Modi on Wednesday evening told his Council of Ministers to help maintain harmony in society with the Supreme Court verdict in the Ayodhya-Ramjanmabhoomi case due to be out soon. He was addressing a closed-door session following a meeting of the Union Cabinet in New Delhi.

Mr. Modi had first spoken about his concerns over Ayodhya during his monthly radio broadcast show Mann Ki Baat where he had said that there had been attempts by certain “interest groups” to stoke unrest in September 2010, when the Allahabad High Ccourt verdict had come, but that civil society and political parties had “behaved maturely”.

His counsel also comes at a time when RSS office-bearers have been meeting leaders of the Muslim community for the same.

RSS joint general secretary Dattatrey Hosabele had met Maulana Syed Arshad Madani, president of the Jamiat Ulama-i-Hind, one of the key litigants in the Ayodhya case.

Apart from this, Union Minister for Commerce Piyush Goyal did a presentation on the recently concluded meet on Regional Comprehensive Economic Partnership (RCEP) where India decided not to sign the trade agreement. The presentation was about why Prime Minister Modi felt it wasn’t in India’s interest to sign the pact.

The Jamiat on Wednesday said it would accept the Supreme Court’s judgment, and appealed that under no circumstance should any community resort to violence after the verdict. “No matter which way the judgment goes, we have to abide by the law and maintain peace. If there is no peace, the idea of a united country is lost. And we aren’t alone in this thought,” Mr. Madani said at a press briefing.

The judgment in the Ram Janmabhoomi-Babri Masjid case is expected any time before November 17.

The Maulana said the case was a “test case of the supremacy of law”.

“Every justice loving person wants the judgment to be based on hard facts and evidence and not on the basis of faith and belief. We trust in the law and have faith that justice will prevail. But no matter what the judgment, we hope peace is maintained,” he said. Mr. Madani noted that he had met RSS chief Mohan Bhagwat on the issue and was “assured that the court’s judgment would be final”.

In its one-page “reconciliation formula” for resolving the dispute, the group had said the Hindu parties should give up their claim over the three-dome portion and its courtyard area, where Muslims offered prayers. “This portion cannot be sold, transported, gifted to somebody in accordance with the Islamic Shariah and also the Indian Waqf Act does not permit it,’’ the Jamiat Ulama-i-Hind said in a release issued by it at the media briefing.

“If the Hindu parties do not agree to the above-mentioned formula, we should wait for the judgment of the Supreme Court,” said the release.