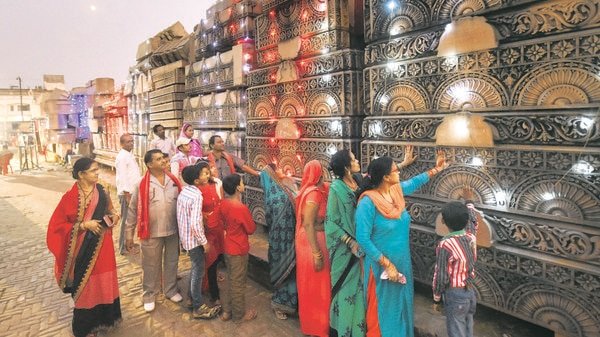 AYODHYA : The day after the Supreme Court delivered its verdict in the Babri Masjid-Ram Janmabhoomi dispute, there’s an air of quiet acceptance in Raunahi, a Muslim-dominated village off the Lucknow-Faizabad highway. Barely 20km from the disputed site, plates of sweets and soft drinks are being readied for the annual celebratory procession to mark the Prophet’s birthday. Children and men in sparkling white are milling about. The mood is relaxed, and quite in contrast to the heaviness that filled the hours after the verdict and stretched into the night of 9 November.

When the procession arrives, I am introduced to Firoz Khan “Gabbar”. His family manages the Juber Ganj animal market, and is one of the wealthiest and most influential in the district. Gabbar himself has contested the last assembly election on a Bahujan Samaj Party ticket and is known for having relationships across communities and parties. “This judgement is based on what is in the interest of harmony in the country. There is a bit of kasak (disappointment), but we can live with that. At least now our Hindu brothers can build their temple,” he says while greeting other local grandees of the community.

In Ayodhya, meanwhile, the mood among Hindus is largely of dignified jubilation. Soon after when it became clear that the court has ordered the setting up of a trust to oversee the construction of a Ram temple at the disputed site, Ram Vachan Agarwal, owner of a small eatery near the post office, opened two boxes of laddoos from the glass cabinet and instructed one of his employees to distribute it to everybody present there. “Initially, while the verdict was being read out, my heart sank. But the court had to rule in favour of the temple, there could have been no other verdict. It is the victory of truth,” says Agarwal.

The Supreme Court has used Article 142 of the Constitution to award the entire area on which Babri Masjid stood to Ram Lalla Viraajmaan, the deity. It has also ordered that Muslims be given a 5-acre plot in Ayodhya to build a new mosque. It has also acknowledged that the forcible implantation of Ram-Sita idols in 1949 and the demolition of the 16th century mosque in 1992 were criminal acts.

While some legal experts have criticized the judgement, at ground zero a majority of both Hindus and Muslims are relieved that the bloody dispute can now finally be put to rest and are expecting it to be a turning point in Ayodhya’s rich history.

Outside the Ram Janambhoomi complex, which houses the makeshift temple, hundreds of rejoicing pilgrims from across the country were seen queuing up for darshan since early in the morning. A group of 12 pilgrims from Karnataka were busy taking selfies and making video calls with their family back home.

About a km from the disputed complex, in Janaki Ghat’s Madhuresh Kunj ashram, Achyutanand, a 20-year-old preacher of Ramanuja philosophy, celebrated the verdict with his fellow celibate monks. When asked how he thinks Ayodhya will benefit from the verdict, he replies with the clarity of a lawyer: “There will now be a 360-degree development of Ayodhya. A grand Ram temple like that in Somnath in Gujarat will bring tourists throughout the year, there will be more work for everybody and therefore more prosperity.”

In the Hindi heartland, Ayurvedic medicines and home-made herbal fixes for simple ailments are often marketed as being a Ram Baan (Ram’s arrow) solution—for, Ram’s arrows never miss their target. It is the ultimate compliment for a medicine but also one that runs the risk of being rendered ineffective by indiscriminate use. The Ram temple being the embodiment of all solutions to Ayodhya’s problems is not a new thought.

The pro-temple lobby has carefully projected the temple as not the only solution but also the best one for the temple town’s broken civic infrastructure and lack of employment opportunities. In the days leading up to the Supreme Court verdict, several Bharatiya Janata Party (BJP) leaders as well as sadhus had made statements claiming that the verdict will clear the way for a Ram temple and with it Ayodhya’s all-round development.

Now that the judgement has ordered the central government to draw up a scheme in three months for the temple’s construction, locals have put aside their scepticism, for now at least, and are actually hopeful that the state and the Centre are serious about the temple-town’s development.

These visions of a total turnaround have become more vivid and compelling with the BJP’s every election triumph. So much so that even those Muslims who don’t depend on the pilgrim bazaar for their livelihood support the verdict, albeit for different reasons. “This is such a good verdict that I can’t stop welcoming it. The decision has ensured a better future for my sons,” says Ehsan Ali, a day after the Supreme Court judgement.

Ali’s family has lived in Ayodhya’s Katra mohalla for at least eight generations. “We are the oldest landlords here and have no problems with our Hindu brothers. Even if the court had ruled that a mosque be built, do you think it would have been possible?” asks Ali. This oft-heard argument among Muslims of various leanings and shades points to a fait accompli that the community has accepted and internalized.

“It would be detrimental to us and quite pointless if the Sunni Waqf Board files a review petition. Whatever the court has said should be accepted by all. It would have been better if we had resolved this though negotiation but, frankly, I am happy. We have had enough of this dispute,” adds Ali.

Mohd Shahid’s house situated on the main street in Ayodhya has remained locked for the past few days. “My wife insisted that we leave ahead of the verdict so we have come to a relative’s place in Gonda,” he says over the phone. Shahid was a strapping 17-year old when his father was killed on 6 December 1992. After the incident, the family’s thriving timber business collapsed and Shahid now drives an e-rickshaw.

“I hope this verdict leads to closure. My father was loved by local Hindus, but he wasn’t spared by the communal fire. I am returning to Ayodhya tomorrow and I hope we don’t have to leave the town again like this”, says Shahid.

Not all Muslims and Hindus in Ayodhya-Faizabad are so sure that this is the end of the dispute. While Muslim bodies like the Sunni Central Waqf Board and All India Muslim Personal Law Board deliberate on whether or not file a review petition against the court’s verdict, a section of Muslims in Faizabad, Ayodhya’s twin town, feel that the judgement is a letdown.

Khalik Ahmad Khan, a nominee of Mehfoozur Rahman, a petitioner in the title suits, said, “It is a contradictory judgment with several holes. I admit that the court’s intention was to find a balance and respect it but I am not happy with it.” Khan worries that the judgement can be misused by communal forces to replicate the Ram temple movement in Banaras and Mathura. Khan also fears that now every mosque in Ayodhya has become vulnerable thanks to the verdict.

On the other hand, for sadhus like Baba Shiv Das, the dismissal of Nirmohi Akhara’s suit is something that will come back to haunt the court. “They are the ones who have been fighting for the longest time, and now the court has thrown their claim out. Wait for sometime before making any final conclusions,” he says.

Nirmohi Akhara is the oldest litigant in the case. It claims shebait rights over the disputed site, but the Supreme Court dismissed its plea and passed an order stating that a government trust would be formed for the construction of the temple.

This was reflected in the ugly bickering between Mahant Sitaram Das, national spokesperson of the Nirmohi Akhara, and the Vishva Hindu Parishad (VHP)-backed Raju Das of Hanuman Garhi during a live TV debate. “We welcome the verdict like every Hindu in the world, but the court should not have dismissed our claim. We will think on the future course of action,” he said then in response to Raju Das’s comment that Nirmohi Akhara should now stop being “an obstacle” and applaud the verdict.

In the local politics of Ayodhya, there have always been two camps—first, “sadhu samaj” or sage community that is made up of 13 akharas. The second camp comprises some religious leaders who have been cultivated by the VHP since the 1980s. Pre-eminent among the second camp is Mahant Nritya Gopal Das, who is also the head of the VHP-back Ram Janmabhoomi Nyas. The tussle between these two factions is likely to intensify over the constitution of the new trust that is proposed to be formed in the next three months.

It’s very early to predict the consequences of the landmark verdict. Will it become an example of restraint by the Hindu majority and magnanimity by Muslims, who have welcomed the verdict despite sections of them being unsatisfied with it? Will it exemplify the message of communal harmony and mutual accommodation that most of Ayodhya’s Hindus and Muslims have sent in the wake of the verdict or will it just lead to more claims over various Muslim places of worship in Ayodhya and elsewhere?

Cynics would find it easy to dismiss the message of communal harmony that has come out of Ayodhya by attributing it to various motives and personal gains. Undeniably, the tiny Muslim minority’s welcoming of the verdict and support for a temple is a pragmatic response rooted in their own question of survival in the land of their forefathers. Nevertheless, it provides an opportunity to Hindus in Ayodhya and outside to reciprocate their large-heartedness.

For too long the dispute has been seen as a fault line between Hindus and Muslims. It is time we filled that up.

The Supreme Court’s verdict directs that Muslims be given an alternate 5-acre plot for the mosque in Ayodhya. This land should be allocated within the town’s boundaries by the Uttar Pradesh government quickly and fairly, and it should ensure that the construction of the mosque begins at the same time as that of the temple. Another pathway to closure is the swift resolution of the criminal cases filed for the demolition of the mosque and the riots that followed.

A couple of kilometres from Raunahi is the sprawling Juber Ganj animal market. With a weekly turnover of lakhs of rupees and thousands of cattle, the market is always bustling with buyers and sellers from across the region. Cattle owners are mainly Yadavs and Muslims but the bookkeepers who issue “exit” passes to buyers also comprise Brahmins and banias.

I asked Ajaz Khan, a 27-year-old sales executive from Lucknow who spends his Sunday working in the market as a bookkeeper for wages of ₹450, about the verdict. “This is a good verdict. If the court had ruled in favour of a mosque, there would have been a lot more trouble. This peace you see is because the verdict is in favour of the temple,” he says.