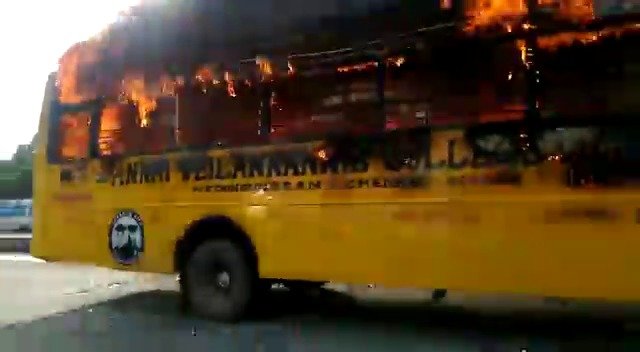 The bus was travelling from Tambaram to Perungalathur at the time of the mishap.

At least 45 students of a city college had a narrow escape after their bus caught fire near Perungalathur Thursday evening. Passersby saw the bus on fire a little after 4 pm and immediately rang up the Tambaram fire station.

Officers from the fire station said the bus, which belonged to Annai Velankanni’s College for Women, was ferrying 45 students from Tambaram to Perungalathur at the time of the mishap. “We received a call at 16:24 regarding the fire and rushed to the spot immediately. Since the door of the bus was kept open, the students managed to escape unharmed,” a firefighter told.

The driver of the bus suspected that the fire had been caused due to a short circuit.