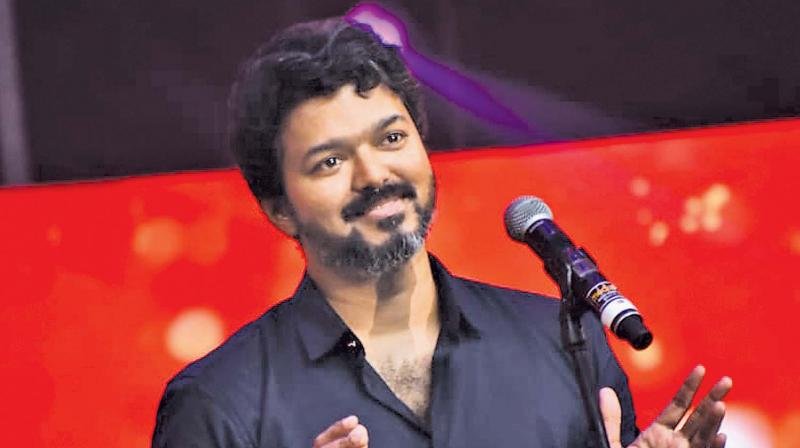 Agreeing that the actor too had a freedom to express, the BJP leader added “provided he gets the fact right, why would anyone object.”

Chennai: From Mersal to Bigil, actor Vijay may not have changed his stand on criticising the government a wee bit or refrain from making political statements. But, from taking an aggressive posture against him for two years, the BJP’s tone now appears to mellow down.

His latest controversy which spontaneously evoked the support from the opposition parties is on techie Subashri who was killed in an accident after a hoarding fell on her. His remarks however did not go well with the AIADMK, which dismissed Vijay’s criticism as an attempt to get publicity ahead of a film’s release.

Last week, at the audio launch of his latest film to be released – Bigil – Vijay highlighting the death of Subashri said that the person responsible for her death (AIADMK former Councillor) is still roaming free. Imposing faith in social media, the actor said that the social network can be a powerful tool and such issues can be brought to the fore on the medium with the use of hashtags. Since Bigil revolves around football, he said, “you can play politics in many ways, but do not let politics enter sports.”

“He is a citizen and no one can say that he should not express political views. Everyone will be happy if he utters the truth and none will regret if Vijay speaks facts,” BJP senior and former Union Minister of State for Finance and Shipping Pon Radhakrishnan has reacted.

Agreeing that the actor too had a freedom to express, the BJP leader added
“provided he gets the fact right, why would anyone object.”

The actor has managed not only to sustain the interest of his fans and keep them guessing as to whether he would take a plunge into politics but also draw the attention of the political parties ahead of the release of his films, every time.

In 2017, when he criticised the newly introduced GST and Digital India programme, in his film Mersal, the BJP took strong exception and coerced the filmmaker to ensure appropriate changes in the film. But this did not deter the actor who took the AIADMK government head on in his Sarkar in 2018, which allegedly showed former Chief Minister J. Jayalalithaa in poor light. Later, the objectionable portions were deleted from the film.

Bigil, directed by Atlee and produced by AGS Entertainment with music by A.R. Rahman, is touted to be a sports drama starring Vijay and Nayanthara in the lead roles.