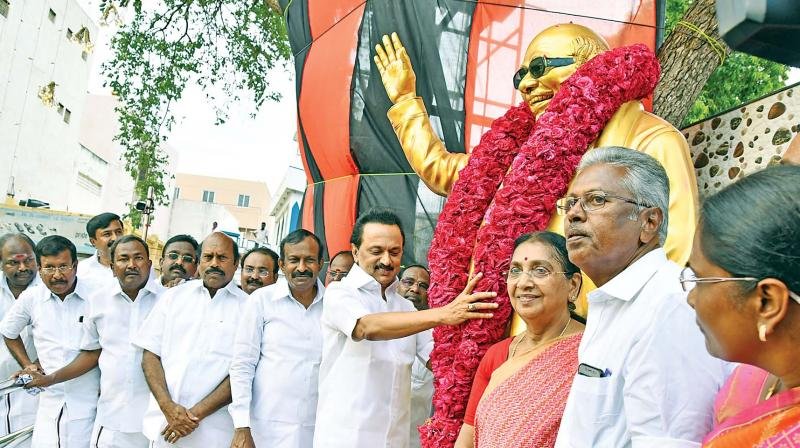 Karunanidhi’s entire life had thus been one of “struggle for public causes and the people”; yet when he died.

ERODE: In remarks that could stoke fresh political controversies, the DMK president M K Stalin said here that his late father and former Chief Minister M Karunanidhi was unfairly jailed during the anti-Hindi agitation, even as he regretted that ruling AIADMK has not held a formal condolence meeting for former Chief Minister J Jayalalithaa even two years after her demise in 2016.

“We (DMK) may have many differences with Ammaiyar Jayalalithaa; she died when she was Chief Minister and now those in power, the AIADMK, who have benefitted from her mandate and enjoying the spoils of office, have not even held a formal condolence meeting for Jayalalithaa even over two years after her demise in December 2016,” Stalin said speaking at a meeting to unveil a statue of Karunanidhi in Panneerselvam park in Erode on Sunday.

Recalling several facets of the late DMK patriarch’s life, Stalin said, Karunanidhi, even after his demise, continued to be a “reference point” in both national and state politics, largely because of his range of contributions to politics, the political agitations he had led and suffered for, and the principles for which he fought.

In that context, Stalin said during one of the early anti-Hindi agitations in Tamil Nadu, Karunanidhi was unfairly arrested under the then Defence of India Rules and “put in solitary confinement” in Palayamkottai prison.

During the Emergency, two envoys of then Prime Minister, Indira Gandhi had called on ‘Kalaignar’ to explain that he need not support the Emergency, but should not oppose it. “If you oppose, the DMK government will be dismissed,” they told Karunanidhi. But he did not budge, Stalin said, adding, ‘Kalaignar’ told them the DMK was ready for any sacrifice to protect the people’s rights.

Karunanidhi’s entire life had thus been one of “struggle for public causes and the people”; yet when he died, the AIADMK government did not even give him a small place to rest on the Marina beach in Chennai, Stalin regretted, adding, it was the Madras High court which eventually ensured justice.

Pointing out that even the unveiling of this second statue in Erode was embroiled in a legal hurdle, Stalin said the DMK will continue to commemorate the political life and work of Karunanidhi among all sections of the people by unveiling his statues in different places of Tamil Nadu with due permission from the state.

West Bengal Chief Minister, Mamta Banerjee had honoured the memory of ‘Kalaignar’ by coming down all the way from Calcutta to unveil his statue at the DMK organ ‘Murasoli’ office in Chennai recently, Stalin underscored.