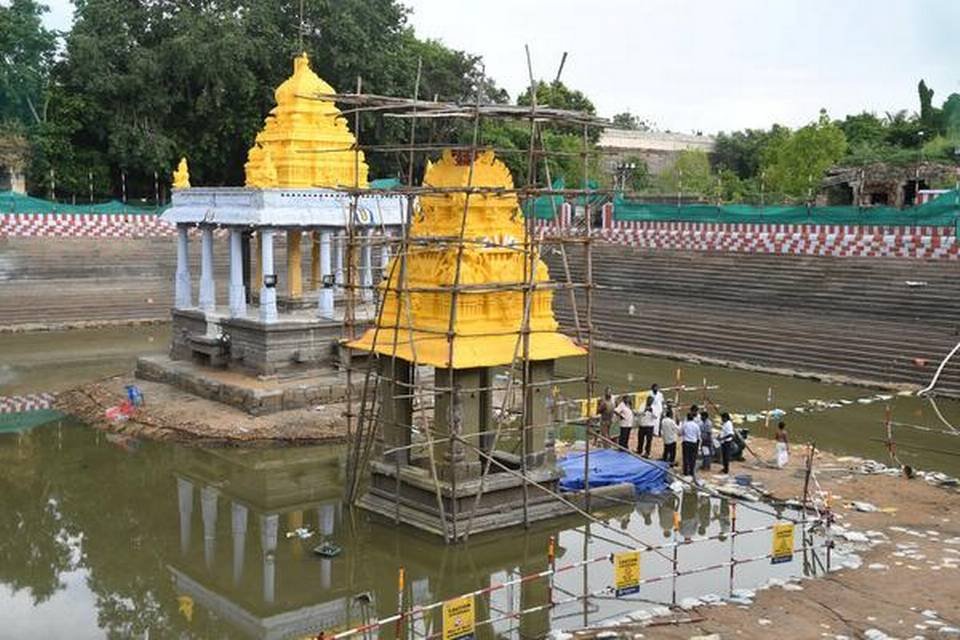 Darshan allowed till late in the evening on final day of public viewing at Kancheepuram temple.

With preparations on to lower the idol of Athi Varadar into the Ananthasaras tank at the Sri Devarajaswamy temple in Kancheepuram, devotees thronged the shrine for a final darshan of the idol on Friday, the last day of the once-in-40-years festival that began on July 1.

Though darshan for those coming through the eastern gopuram of the temple was to close at 9 p.m., the priests continued to allow people in much after as they did not want to deny darshan to anyone on the last day. District Collector P. Ponniah said that over a crore devotees had visited the temple over the last 47 days and added that darshan would close late on Friday.

Till afternoon, around 1.5 lakh devotees had visited the temple and the number was expected to touch the 3.5 lakh-mark. This, despite a steady drizzle through the day.

Residents, who have under gone a lot of hardship over the past month and a half, waited with bated breath for the orders of the Madras High Court on a bunch of cases that sought extension of darshan. However, when the court decided not to allow an extension, many including Ramanujan of South Mada Street said they were relieved.

“Many of us were unable to get out or into our homes,” he said.

On Friday evening, the collector and other officials inspected the Ananthasaras tank where repairs to the steps and pillars of the mandapam beneath which the idol would be kept were undertaken.

On Saturday, with darshan closed for the public, the 21 archakas of the temple will apply a concoction on the idol. R. Srivatsa Bhattar said that around 60 kilos of Sandhanadhi Thailam containing, among other ingredients, saffron, vettiver, velamuchi ver, sambrani, cardamom, jaadhikka and lavangam would be applied by the priests thrice to potect the idol from fungus and termite attacks.

“After chanting the Swasti Vaachanam from the Vedas, where the priests pray to the Lord for good tidings, the 40 Sripadam Kainkarya members will place the idol on a plank and carry it to the tank till the front of the mandapam. From there, the priests will physically lift the idol and take it underground, where it will be placed inside a granite stone tub. Naga stones will be placed on the idol’s shoulders, feet and hip to prevent it from floating up,” he said. This entire process will be carried out late at night and will take about two hours.Once the idol is placed inside the vault, priests predict rain that will help fill the tank up.