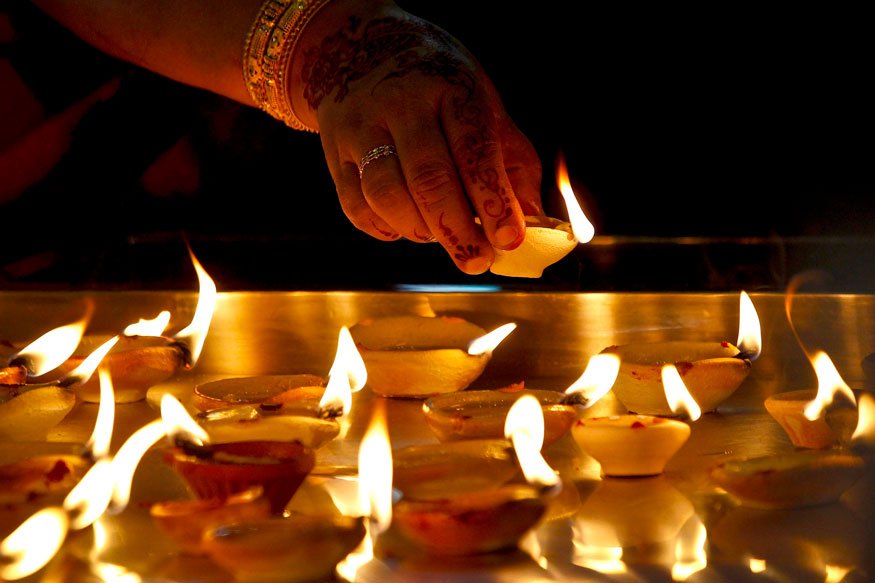 Diwali (or Deepavali in Sanskrit) literally means “a row of lights”. This five-day festival, which is the biggest in India, honors the victory of good over evil and brightness over darkness. It celebrates Lord Ram and his wife Sita returning to their kingdom of Ayodhya, following Ram’s and monkey god Hanuman’s defeat of demon Ravan and rescue of Sita from his evil clutches (on Dussehra).

On a personal level, Diwali is a time for introspection, to contemplate and dispel our own darkness and personal demons. Let light shine within yourself, and also shine this light outwards.

In October or November, depending on the cycle of the moon.

In 2018, Diwali commences with Dhanteras on November 5. It concludes on November 9. The main festivities take place on the third day (this year, on November 7). Diwali is celebrated a day early in south India, on November 6.

Where is the Festival Celebrated?

Throughout the whole of India. However, Diwali isn’t widely celebrated in Kerala, in south India. Why not? The reason seems to simply be that the festival has never really evolved there, as it’s not part of the state’s social fabric and distinctive culture. An alternative explanation that’s offered is that Diwali is a festival of wealth for merchants, and the Hindus of Kerala have never freely engaged in trade as the state is a Communist ruled one. However, Diwali dates back to long before this.

The main festival that’s celebrated in Kerala, and which is specific to the state, is Onam.

How is the Festival Celebrated?

Each day of the festival has a different meaning.

If you’re wondering about where to best experience Diwali and what to do for the occasion, these Diverse Ways and Places to Celebrate Diwali in India will give you some inspiration.

Tripadvisor (in conjunction with Viator) offers Diwali experiences with local Indian families in Delhi and in Jaipur.

What Rituals are Performed During Diwali?

The rituals vary according to region. However, special blessings are given to Goddess Lakshmi and Lord Ganesh, the remover of obstacles. Goddess Lakshmi is believed to have been created from the churning of the ocean on the main Diwali day, and that she’ll visit every home during the Diwali period, bringing with her prosperity and good fortune. It’s said that she visits the cleanest houses first, therefore people make sure their houses are spotless before lighting lamps to invite her in. Small statues of the goddess are worshiped in people’s homes.

What to Expect During the Festival

Diwali is a family-orientated festival. The lights makes it a very warm and atmospheric occasion and it’s observed with much joy and happiness. However, be prepared for lots of loud noise from the fireworks and firecrackers going off. The air also becomes filled with smoke from the firecrackers, which can add to breathing difficulties.

If you’re visiting India around the time of Diwali, do be aware that this is a peak travel time for Indians, not only during the festival but for a couple of weeks afterwards (due to Diwali school holidays). Trains will be heavily booked and popular destinations will be crowded.

It’s a good idea to protect your hearing with ear plugs during Diwali, especially if your ears are sensitive. Some crackers are extremely loud, and sound more like explosions. The noise is very damaging to hearing. If you’re in Delhi around the time of Diwali, you may also want to consider wearing a mask as pollution has skyrocketed to unsafe levels in recent years.