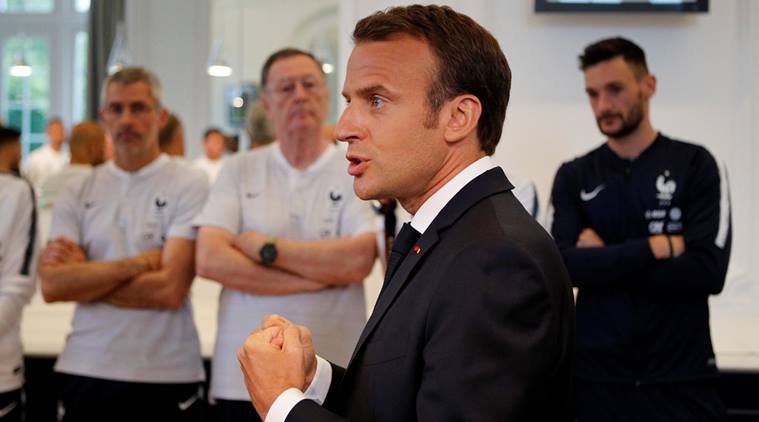 French President Emmanuel Macron sought to wrap himself in the mantle of war hero Charles de Gaulle on Thursday after a spate of ministerial resignations dim an aura of invincibility that accompanied his first year in power.

Macron helicoptered into Colombey-Les-Deux-Eglises in eastern France, where de Gaulle had his country estate, to celebrate the 60th anniversary of the constitution the former general drew up, creating a powerful role for the president.

Macron under fire for Caribbean photo

French President Emmanuel Macron has been put under the spotlight for a photo taken during his visit to the French island of Saint-Martin. Macron posed with a topless teenager who had his middle finger raised.

Hailing the durability of France’s presidential system before laying a wreath at de Gaulle’s tomb, Macron said: “It allows me to avoid the tyranny of immediacy, which is an absurdity of our times, which means day-to-day vagaries should not decide a nation’s course.”

Macron has sought to paint himself as a leader in the mould of de Gaulle, a towering father-figure of modern-day France who made strong authority a totem of his presidency and had a deep sense of belief in his own destiny. In his official photograph, a copy of de Gaulle’s war memoirs sit on Macron’s desk.

But even de Gaulle, who frequently ranks in polls as one of France’s greatest historical figures, lost the sheen of success as he sought to rebuild the French economy after World War Two and reform political institutions.

“De Gaulle could be imperious so long as he delivered positive results for France. Macron faces the same challenge as events crowd in on him,” said Jonathan Fenby, author of “The General: Charles de Gaulle and the France He Saved”.

IN THE GENERAL’S FOOTSTEPS

Sixty years ago, de Gaulle felt a duty to transform France as it grappled with a bloody colonial war in Algeria and weak and unstable institutions. Macron too believes he must overhaul France to make its institutions more efficient, create growth and counter the rise of far-right populism.

“It was the spirit of 1958, it must be that of 2018, because today as then and today perhaps more than then, the people want to feel listened to by political elites constantly asked to prove themselves,” Macron said in a speech on Thursday.
Macron, 40, wants to revamp France’s constitution to cut the number of lawmakers by a third and introduce an unaccustomed dose of proportional representation.

Yet even as Macron sought to place himself in the General’s footsteps, his so-called “day-to-day vagaries” were quick to catch up with him as he met mostly white-haired pensioners in Colombey-Les-Deux-Eglises.

Some complained about the higher levies Macron imposed on their pensions in order to lower those on workers. “Are you joking?” one said as he denied that pensions had been eroded.

With typical frankness, Macron said France would be a better place if people complained less. “The General’s grandson earlier told me, ‘We used to be able to speak freely. The one thing we weren’t allowed to do was complain’,” he told the retirees.

Macron’s frequent sharp tongue – he berated striking workers for “kicking up a bloody mess” and called critics of his labour law reforms “slackers” – has exposed him to accusations of being an arrogant and patronising president.

“I think the General had it right,” Macron said. “You know, this country would be different if we were like that. We don’t realise how immensely lucky we are.”