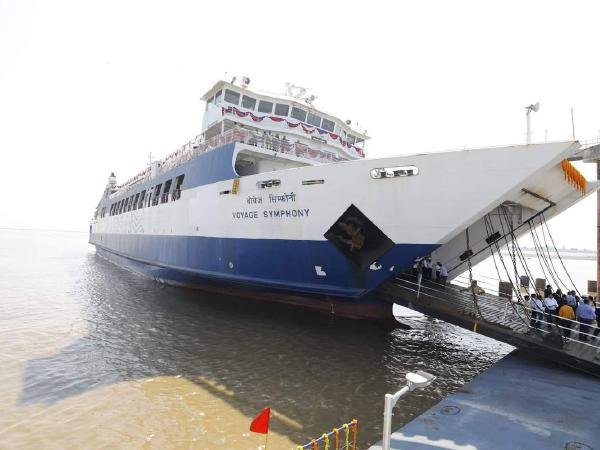 Bhavnagar:  Gujarat chief minister Vijay Rupani launched the Ghogha-Dahej Ro-Pax ferry service on Saturday, with BJP functionaries, shipping agents, ship recyclers from Alang and representatives from other industrial sectors accompanying him on the maiden voyage of the new Ro-Pax ferry.  The ferry, which connects Saurashtra to South Gujarat, carries passengers and vehicles across the Gulf of Khambhat between Ghogha (Bhavnagar district) and Dahej (Bharuch district).

The chief minister also announced that a similar ferry service will also be launched between Ghogha and Hazira, which is around 20 kms from Surat, by December. He made the announcement while addressing a public gathering near Ghogha terminal before undertaking the ferry journey. CM Rupani also stated that the government would explore the possibilities if the ferry service could be extended to Mumbai and whether Kutch could be connected to places such as Dwarka, Somnath and Porbandar.

As per a report in DNA, Rupani said, “At present, the devotees from Kutch travel a long distance to visit the religious places. We will explore the possibility of a ferry service on the lines of the one operating between Ghogha and Dahej.”

Harsh Patel, president of Sihor Steel Re-rolling Mills Association, who was onboard the Ro-Pax ferry, told the Indian Express that as the service was currently only till Dahej, people travelling to Surat found it “cumbersome” as Dahej was three hours away from Surat. “So, we have requested the CM to extend the service till Hazira,” Patel said.

On its inaugural journey, the ferry – called Voyage Symphony – left Ghogha terminal at 3 pm and arrived at Dahej port at 5 pm, covering a distance of 17 nautical miles in around 2 hours. Around eight heavy vehicles, including two empty luxury buses, were allowed to board on the lowest deck of the ferry. While the second deck of the ferry is reserved for private, the third desk is meant for passengers.