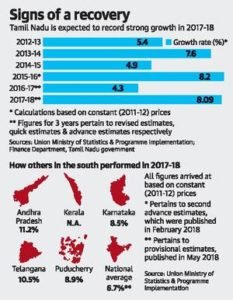 Tamil Nadu has clocked a growth rate of 8.09% in 2017-18, staging a recovery from the effects of November 2016 demonetisation and the introduction of Goods and Services Tax (GST) in July 2017.

The State government data, approved by the Centre, revealed that this has been largely due to the double-digit growth rate of agriculture and allied activities aided by the other two sectors – industry and services. The farm sector registered 15.1% growth rate followed by industry’s 7.75% and services’ 6.55%. In absolute figures, the value of GSDP at constant (2011-12) prices was estimated at about Rs. 10.9 lakh crore during 2017-18

It was only in 2016-17 that the State had put up a miserable performance of 4.3% economic growth. Then, drought and demonetisation had hit the State. Illness and hospitalisation of Chief Minister Jayalalithaa for over two months coupled with her death in December 2016 and rumblings in the AlADMK had created a perception of political instability in the State.

Apart from the impact of the demonetisation, the year 2017-18 began with the talk of political instability looming large over the State as Edappadi K. Palaniswami assumed charge as Chief Minister in mid-February 2017.

“The State’s showing in economic growth last year has dispelled the notion of political instability,” said Fisheries Minister D. Jayakumar, regarded as the Cabinet’s spokesperson. He said that “proper maintenance” of law and order and strong infrastructure paved the way for the recovery.

K.R. Shanmugam, Director of the Madras School of Economics, attributed the “base year effect” to the performance of the farm sector. In 2016-17, the poor realisation of Cauvery water by Tamil Nadu coupled with the failure of northeast monsoon had a huge bearing on grain production.

However, he said that given the State’s base in manufacturing, the performance of industry should have been 9% to 10%. In that case, the overall growth rate of the State would go up.

Pointing out that the State’s services sector has largely been dependent on manufacturing, Ma Foi K. Pandiarajan, Tamil Culture-Development Minister and an industrialist by profession, said he is surprised at the relatively poor performance of the services sector, which requires greater focus, as it accounts for one-half of the GSDP. He expressed the hope that the State would re-establish its position with regard to start-ups, for which a policy announcement is expected soon.

A long-standing observer of the State economy, on condition of anonymity, said the government should pay more attention to the State’s traditional strength such as renewable energy.