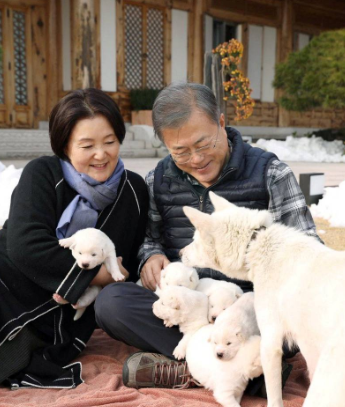 South Korea’s former president Moon Jae-in said on Monday he plans to give up a pair of dogs sent by North Korean leader Kim Jong-un as a gift following their 2018 summit, citing a lack of support from his successor.

Mr Moon has raised the white Pungsan dogs, named Gomi and Songgang, since their arrival in the South. He took them to his personal residence after his term ended in May.

The dogs are legally categorised as state property belonging to the presidential archives, but Mr Moon’s office said he was entrusted as their caretaker under consultations with the archives and the interior ministry, an unprecedented decision.

The agencies had sought a legislative amendment to facilitate the move, including financial support.

But that effort fell apart due to “unexplained opposition” from the administration of incumbent President Yoon Suk-yeol, Mr Moon’s office said.

“The presidential office seems to be negative toward entrusting the management of the Pungsan dogs to former president Moon,” Mr Moon’s office said on Facebook.

“If that’s the case, we can be cool about it, as such an entrustment is based on the good will of both sides … though ending it is regretful given they are companion animals he grew attached to.”

Mr Yoon’s office denied foiling the move, saying the agencies are still discussing it, and it has not played any role.