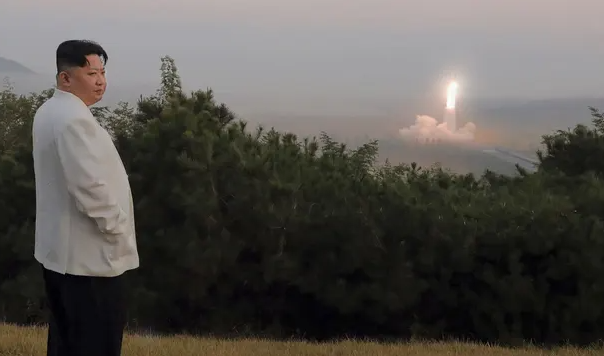 North Korea’s recent flurry of missile tests demonstrated its ability to carry out strikes with tactical nuclear weapons, its leader, Kim Jong-un, has said, adding that his forces were “completely ready to hit and destroy targets at any time from any location”.

Kim, who last month said the North’s transformation into a nuclear power was “irreversible,” said the drills were “an obvious warning and clear demonstration” to the country’s enemies.

The regime’s short-range tactical nuclear missiles would be unable to reach its nemesis – the US – but could theoretically be used against the South and Japan.

In a report carried on Monday, the state news agency KCNA said that Kim had ordered the test launches in response to large-scale navy drills by South Korean and US forces.

Tokyo and Washington recently resumed the exercises, including the deployment of the nuclear-powered aircraft carrier the USS Ronald Reagan to waters off the east coast of South Korea – a move that infuriated Pyongyang, where the drills are seen as a rehearsal for an invasion.

In response, North Korea “decided to organise military drills under the simulation of an actual war,” KCNA reported.

Army units involved in “the operation of tactical nukes, staged military drills from 25 September to 9 October in order to check and assess the war deterrent and nuclear counterattack capability of the country,” the report said, confirming that Kim had personally directed the exercises.

Official photographs showed Kim at all of the missile launches and exercises, giving orders and posing with smiling soldiers.

“They’re pursuing a tactical nuclear weapon for sure,” said US-based security analyst Ankit Panda. “I suspect they’ll gradually nuclearise many of their new short-range missiles, including the manoeuvring missiles.”

The fact that North Korea has described all seven of its recent missile launches as being linked to “tactical nuclear operations units” is significant, he added, since the inventory includes everything from short-range and intermediate-range ballistic missiles, to a new short-range missile designed to be launched from a submarine.

Kim, who has presided over dramatic improvements in missile and nuclear development despite years of UN sanctions, has long wanted to acquire tactical nuclear weapons – smaller, lighter weapons designed for battlefield use – and made it a top priority at a key party congress in January 2021.

Last month, North Korea revised its nuclear laws to enable it to conduct preemptive nuclear strikes, including in response to conventional attacks.

Kim guided exercises by the country’s nuclear tactical operation units over the past two weeks, involving ballistic missiles with mock nuclear warheads, KCNA said, adding that they were meant to deliver a strong deterrent message.

“The effectiveness and practical combat capability of our nuclear combat force were fully demonstrated as it stands completely ready to hit and destroy targets at any time from any location,” KCNA quoted Kim as saying. “Even though the enemy continues to talk about dialogue and negotiations, we do not have anything to talk about nor do we feel the need to do so.”

South Korean and US officials say there are signs North Korea could soon detonate a new nuclear device in underground tunnels at its Punggye-ri nuclear test site, which was officially closed in 2018.

Analysts say putting small warheads on short-range missiles could represent a dangerous change in the way North Korea deploys and plans to use nuclear weapons.

Leif-Eric Easley, a professor at Ewha University in Seoul, said North Korea had “multiple motivations” for publicising the launches.

“Pyongyang has been concerned about military exercises by the US, South Korea and Japan, so to strengthen its self-proclaimed deterrent, it is making explicit the nuclear threat behind its recent missile launches,” he added.

… as you’re joining us today from India, we have a small favour to ask. Tens of millions have placed their trust in the Guardian’s fearless journalism since we started publishing 200 years ago, turning to us in moments of crisis, uncertainty, solidarity and hope. More than 1.5 million supporters, from 180 countries, now power us financially – keeping us open to all, and fiercely independent.

Unlike many others, the Guardian has no shareholders and no billionaire owner. Just the determination and passion to deliver high-impact global reporting, always free from commercial or political influence. Reporting like this is vital for democracy, for fairness and to demand better from the powerful.

And we provide all this for free, for everyone to read. We do this because we believe in information equality. Greater numbers of people can keep track of the events shaping our world, understand their impact on people and communities, and become inspired to take meaningful action. Millions can benefit from open access to quality, truthful news, regardless of their ability to pay for it.