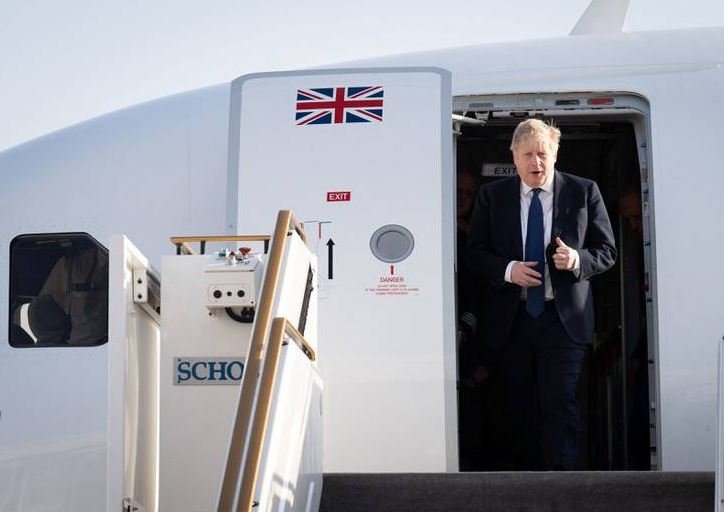 Britain’s Prime Minister Boris Johnson landed in Abu Dhabi on Wednesday for talks with senior officials over the war in Ukraine and the global energy crises.

He was guided through a guard of honour before travelling across the city to Emirates Palace.

Speaking to British media at the Emirates Palace hotel, Mr Johnson said: “It’s not just a question of looking at the Opec countries and what they can do to increase supply, though that is important, there’s also the issue of Emirati investment in UK wind farms, already huge, what more can they do.

“When we look at the dependency the West in particular has built up on Putin’s hydrocarbons, on Putin’s oil and gas, we can see what a mistake that was because he’s been able to blackmail the West and hold western economies to ransom – we need independence.”

He said the British government would be setting out the energy strategy “next week” to include a “massive jump forward on renewables, more nuclear, using our own hydrocarbons more effectively” and sourcing fossil fuels from outside Russia.

Mr Johnson said there is “no way Ukraine is going to join Nato anytime soon” but stressed that the decision had to be for the country’s president to take.

“I talked to Volodymyr (Zelensky) again yesterday and of course I understand what he is saying about Nato and the reality of the position,” he said.

“And everybody has always said – and we’ve made it clear to Putin – that there is no way Ukraine is going to join Nato anytime soon.“But the decision about the future of Ukraine has got to be for the Ukrainian people, and Volodymyr Zelensky is their elected leader and we will back him.

“And the most important thing is that Putin’s aggression, his absolutely barbaric attacks on Ukraine should stop and they should not be seen to have succeeded, and they won’t succeed.”