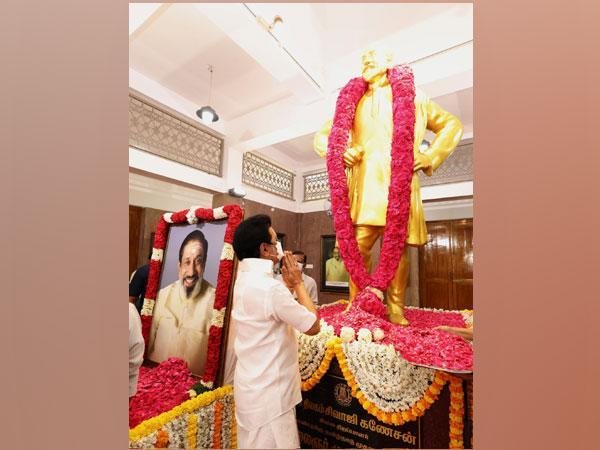 Chennai: The Chief Minister of Tamil Nadu and President of DMK, MK Stalin paid floral tribute to Sivaji Ganesan at his Memorial in Chennai on the veteran Tamil actor’s 93rd birth anniversary on Friday. He also heaped praise on the actor and said that his fame will be cherished till the time there is a world of art.

Taking to Twitter, the Chief Minister posted, “The pinnacle of acting – the grammar of friendship Actor Tilak Sewaliye Shivaji Ganesan’s Birthday! Gunasekara roared the fiery revolutionary Parasakthi verse in a lion’s voice and praised the friendship with the leading artist!”

Taking to his Twitter handle on Friday, Haasan shared a throwback picture of himself with the late actor and wrote a message to honour his memory. Haasan’s tweet loosely translates to: “He who saw the pinnacle of the performing arts. The golden age of cinema. Who is timeless in the hearts of the people. Shivaji Ganesan, the artist of eternity. My prayers on his birthday.”

Vikram Prabhu, who is Sivaji Ganesan’s grandson, shared the Google Doodle in honour of the veteran actor and wrote, “Here is the #Googledoodle honouring the Legend #SivajiGanesan on his 93rd birthday. Appreciate the people from Google India and their guest artist Noopur Rajesh Choksi for the doodle art. Another proud moment! Love him and miss him more every year!”

Cinematographer P. C. Sreeram shared a picture of the late actor on his Twitter handle and wrote, “Blessed to capture him in Devarmagan. Beautiful memories and great learning in the process..”