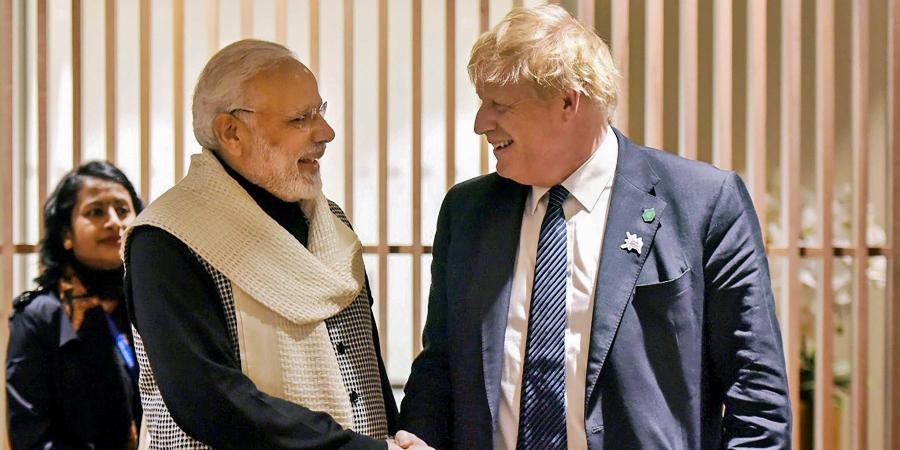 PM Johnson demanded the Labour Leader retract the leaflet used at the recent by-election for the constituency of Batley and Spen in northern England.

LONDON: UK Prime Minister Boris Johnson and Opposition Leader Keir Starmer clashed in the House of Commons over a controversial by-election leaflet, which had been branded “divisive” and “anti-India” by Indian diaspora groups in Britain.

During a heated debate over the issue of racism at the Prime Minister’s Questions (PMQs) session on Wednesday, Johnson held up the leaflet showing him in a handshake with Prime Minister Narendra Modi at the G7 Summit in 2019 with the message “Don’t risk a Tory MP who is not on your side”.

He demanded the Labour Leader retract the leaflet used at the recent by-election for the constituency of Batley and Spen in northern England, a seat held by the Opposition party.

“May I ask him now to retract this leaflet I have here that was produced by the Labour party during the Batley and Spen by-election, which was condemned by his own MPs as ‘dog-whistle racism’,” Johnson said.

However, the Labour Leader skirted around the remark to continue his tirade against the ruling Conservative Party for not fighting back against racist abuse faced by England’s footballers on the pitch.

“This is really simple, either the Prime Minister is with the England players in their stand against racism or he can defend his own record, and that of his ministers and some of his MPs, but he cannot have it both ways.

Can he tell the House whether he now regrets failing to condemn those who booed England’s players for standing up to racism,” said Starmer.

He made specific reference to UK Home Secretary Priti Patel, as he referenced England team footballer Tyrone Mings recently pointing to some of the senior Cabinet minister’s remarks serving to “stoke the fire” of racism and hatred.

“We love and admire the England side and what they did. They represent the best of our country. Nobody defends booing the England side. But what the Home Secretary has been trying to do all her life is not just fight racism, but take practical steps to advance the cause of black and minority ethnic groups, which she has done successfully, notably in the police,” Johnson said in her defence.

The clash re-ignited the row over the controversial by-poll leaflet, which had caused outrage from within the Labour Party ranks and widely across Indian diaspora groups.

At the time of the by-election at the end of last month, the Labour Friends of India (LFIN) diaspora group demanded the “immediate withdrawal” of the leaflet.

Indian-origin Labour MP Navendu Mishra took to Twitter at the time to declare that “racism is alive and well within Labour”.

The Overseas Friends of BJP (OFBJP) group reacted by organising a letter of complaint to party leader Keir Starmer, criticising the “vote-bank politics” of the campaign leaflet.

“OFBJP objects to this kind of anti-India branding just for vote-bank politics. Such posters and statements are clearly a sign of divisive politics played by Labour,” said OFBJP President Kuldeep Shekhawat.

Angry messages dominated the original Twitter post on social media, with many pointing out that it was Labour’s perceived “anti-India stance” that was among the factors behind its bruising defeat in the 2019 General Election under former leader Jeremy Corbyn.