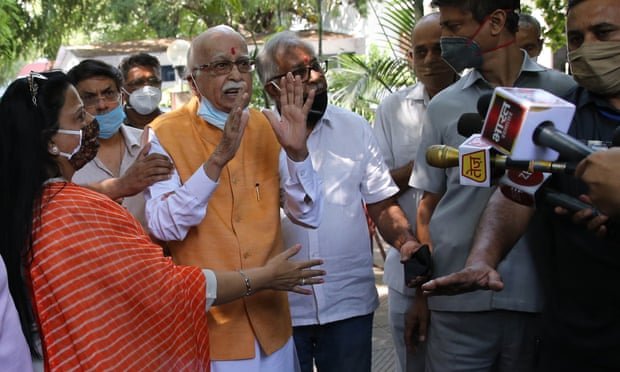 A special court has acquitted all senior figures in India’s ruling party of their role in the demolition of the Babri mosque by Hindu rioters, in a further court victory for the Hindu nationalist government over the bitterly disputed holy site.

All 32 men, including the former deputy prime minister LK Advani, three leaders from the ruling Bharatiya Janata party (BJP) and a sitting BJP politician, were cleared of inciting the violence in 1992 that led to a 16th-century mosque in the city of Ayodhya being torn down by an armed Hindu nationalist mob.

The mob, which included members of the BJP and the militant Hindu nationalist organisation the RSS, alleged the mosque stood on the ruins of a Hindu temple built for Lord Ram.

The destruction of the building led to religious riots in India, which killed about 2,000 people, mostly Muslims. The incident is a pivotal moment in the deep fracturing of India along communal lines.

Bringing the 28-year saga to a close, the judge ruled that the demolition of the mosque had been the spontaneous action of a crowd.

“Antisocial elements brought down the structure. The accused leaders tried to stop these people,” said Surendra Kumar Yadav, presiding at a special court hearing in the Indian city of Lucknow.

There had originally been 49 people named in the case, but 17 died over the course of almost three decades of proceedings. Twenty-six of the 32 named in the case were present for the ruling, at which there was tight security. However, Advani, 92, was told to stay home because of Covid risks.

A commission spent 17 years investigating the demolition and several witnesses had testified that it had been preplanned, even rehearsed, and that professionals had been brought to the site to ensure its destruction.

The verdict proved divisive. A spokesperson for the BJP said they welcomed Wednesday’s verdict as a “vindication” but some politicians, including Sitaram Yechury from the Communist party of India (Marxist), said it was “a complete travesty of justice”.

This is the second court ruling on the contested Ayodhya site that plays into the Hindu nationalist agenda of Prime Minister Narendra Modi’s government. For more than a decade the BJP had made the reclamation of Ayodhya for Hindus a keystone policy.

In November, India’s supreme court awarded the bitterly contested mosque site to Hindus, paving the way for a new temple dedicated to Lord Ram. In August, Modi presided over a ceremony laying the first stone for the construction of the temple and hailed the “dawn of a new era”.

Kapil Komireddi, the author of Malevolent Republic: A Short History of the New India, said the evidentiary burden of the case was very high and it was therefore “not surprising” the authorities had failed to meet it.

“The mosque’s destruction was the culmination of a campaign that sought to bring it down anyway,” he said. “The intent to raze it was always present; the case was about the method deployed to bring it down.

“The men who mobilised Hindus against Muslims were then treated by the state as villains. Now they are exonerated and treated as heroes. Their journey is one measure of India’s transformation into an awful majoritarian state.”

Iqbal Ansari, a petitioner in the Babri case, welcomed the court’s decision. “It’s good that this is now over. Let’s all live in peace. Let there be no fresh trouble of this nature. Hindu and Muslim have always lived in peace in Ayodhya,” he said.

However, Zafaryab Jilani, a lawyer for the All India Muslim Personal Law Board, said they would contest the verdict. “This is an erroneous judgment as it is against evidence and against law,” he said.