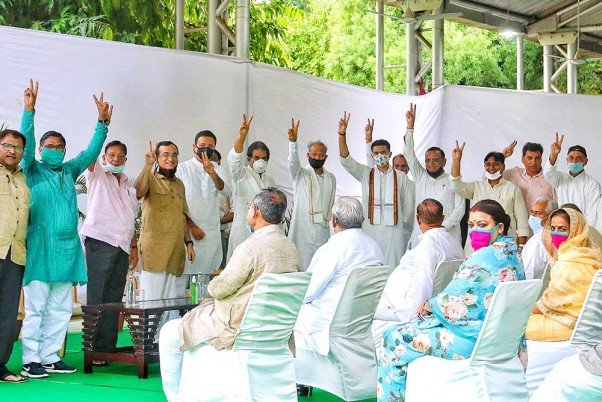 A crucial session of the Rajasthan Assembly will begin on Friday where chief minister Ashok Gehlot will move a vote of confidence to prove the majority of his Congress government.

The chief minister chaired a Congress legislature party (CLP) meeting at his residence on Thursday, where the decision to move the vote of confidence was taken.

This came three days after a patch-up between Gehlot and his former deputy Sachin Pilot, who had rebelled against the chief minister over his style of functioning. Gehlot said he could have proved his majority even without the support of Pilot and 18 of his supporters, but that would not have given him happiness.

“We could have proved our majority even without these 19 MLAs but it would not have given us happiness. We will bring a vote of confidence,” the chief minister said. Pilot was also present at the CLP meeting on Thursday and both the leaders shook hands and flashed victory signs.

The Bharatiya Janata Party (BJP), meanwhile, said that the truce between the two factions is temporary and announced it will move a no-confidence motion in the state Assembly. “This government won’t last long,” former chief minister and BJP leader Vasundhara Raje said on Thursday.

Speaker CP Joshi can use his discretion to decide whether to allow the government or the BJP motion, according to analysts. An official at the assembly secretariat, who did not want to be named, said the government’s trust motion was likely to get preference. “This has been the tradition of the house,” said the official.

With the return of the rebels, the Congress alone has 107 legislators, including the speaker, in the 200-member House where the majority mark is 101. It also appears to have the support of all 13 independents; three of them backed Pilot and have now pledged support to Gehlot. Five MLAs from other parties, too, back the government in the House. On the other hand, the BJP (72) and its ally Rashtriya Loktrantrik Party (3) have a total of 75 seats.

The Gehlot government has already indicated that it is keen on a floor test despite the truce because the party thinks it is the perfect way to send across a message of unity. A floor test will also give some breather to Gehlot to let him put his house in order since a motion can be moved only once in a session.

In a related development, the Bahujan Samaj Party (BSP) on Thursday issued a whip for the second time to six of its MLAs in Rajasthan to vote against the Congress in any no-confidence motion or any other proceedings in the state Assembly.